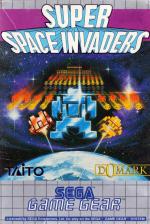 It's your job to do the best you can to repel the xenomorph legions, so pausing only to jump into your mobile death wagon, you vow to destroy every single alien ship that dares darken the Earth's skies. Making things easier is the vast range of extra weaponry open to you.

But be warned! The Invaders have learned a lot about their last defeat over fifteen years ago and have adapted their technology, but more importantly, their tactics - making them the most dangerous beings in the galaxy!

This game is a coin-op conversion of the follow-up to one of the most successful video games in history - Space Invaders!

Shoot up waves of marauding Invaders, collect extra weapons and save cattle from mutilation!

Well-read UFOlogists may have heard about the bizarre cattle mutilations apparently carried out by extra-terrestrial beings. This manifests itself in the game, where you have to destroy firing saucers bent on abducting a herd of cows! Blow them away before your bovine chums are kidnapped for a nice bonus.

I know that the concept is literally decades old, but I still found Super Space Invaders enormous fun. It's virtually the same as the fabulous Master System version, packing in hours of simple, yet highly addictive, fun. Although there's not much variety in gameplay, you'll keep coming back to Super Space Invaders simply because it's an excellent, fun blast - a worthy purchase.

Really good blasts are in short supply on the Game Gear, so the fact that Super Space Invaders is a) a jolly decent blast, b) is tough enough to keep shoot-'em-up fans happy for weeks and c) has great graphics and sounds is more than enough for me to recommend that you rush out and buy it.

Presentation 70%
N. There isn't much in the way of options at all, but the game itself is very professional and polished until it shines!

Graphics 91%
P. A credit to the Game Gear, Super Space Invaders manages to cram in just about every graphical touch of the arcade original! Both backdrops and sprites are brilliantly reproduced!

Sound 85%
P. Although the sound isn't brilliant, your ears are assailed by a barrage of effective blasting effects and explosion noises. Definitely one to annoy the people around you with!

Playability 90%
P. The Game Gear is lacking a decent range of shoot-'em-ups, but Super Space Invaders more than fits the bill with addictive blasting action that hooks you to the Gear immediately!

Lastability 85%
P. Although the action is fairly limited, it's incredibly addictive and getting through all of the different levels is a very taxing task. There are months of play in this one.

Overall 87%
Although the concept might be decades old, Super Space Invaders is still a highly satisfying blast, packing in brilliant arcade action and a serious challenge. One to add to the Gear collection.

Although the concept might be decades old, Super Space Invaders is still a highly satisfying blast, packing in brilliant arcade action and a serious challenge.