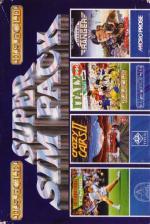 Anyone for tennis? Anyone for football? Anyone for a spot of combat action with the special forces? Three sports simulations and a military one, a strange combination maybe but one which is bound to attract aficionados of the genre.

International 3D Tennis was quite a popular release back in June 1990, however the monochrome 3D graphics didn't suit everyone. It's a realistic tennis game even if the players aren't and the amount of options available for one and two players, difficulty versus the computer etc, makes it an above average sim.

Italy 1990 was released in the midst of world cup fever last year and succeeded in being one of the best of a generally mediocre bunch of footie sims. Reasonable graphics and very impressive speed resulted in somewhat difficult gameplay but overall this game was quite a star.

Airborne Ranger is an unusual simulation. Combined joystick and keyboard control makes it difficult to play at first and even when you figure it out it doesn't make much sense. Guns and Ammo readers or Sylvester Stallone fans might have fun with this game but the matchstick marine action didn't really do anything for me. There are plenty of mission options though.

The sports sims included here are worth a look at though don't go spending your life savings on them. Airborne Ranger is a little disappointing.

I would really only recommend Super Sim Pack to those who already know these games and desperately want them.

An average compilation with some fine simulations if you're into that sort of thing. Italy 1990 and Pro Tennis Sim are the best titles available here.

An average compilation with some fine simulations if you're into that sort of thing. Italy 1990 and Pro Tennis Sim are the best titles available here.
Logout