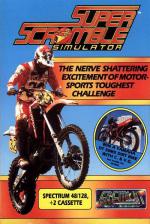 Have you ever seen Kick Start? The BBC's trials riding programme, hosted by Peter "Old Blue Peter Presenters Never Die, They just Fade into Mild Obscurity Along With Their 70's Hairdos" Purvis? The idea is this - a number of 'bikers' compete with each other over a hellish course which is choc-a-block full of obstacles such as logs, cars, see-saw ramps, 86' slopes and crocodiles. (Are you quite sure about that last one? Ed) The course has to be completed in the shortest possible time, and failure to negotiate any of the obstacles results in a time penalty - usually ten seconds. And that, essentially, is what Super Scramble Simulator is - a Kick Start computer game. So let's have a gander.

S.S.S. is a right to left horizontal/vertical scroller with the playing screen split into three bands. (Look at the screenshots. What's that? Oh, you have already. Sorry, my mistake.) The top band is a side view of your bike, the middle band is a bird's eye representation in smaller scale - so you can see what obstacles are coming up long before they appear on the top bit. The bottom band is your motorbike control panel, with speedo, rev-counter, icons to show which gear you're in and the timer, which ticks down from an initial nine minutes and 20 seconds.

There are two types of course in the game - obstacle and off road, the former being, erm, an obstacle course and the latter a more up and down hilly and marshy type affair. The essential difference between the two is that the off road race is a mite quicker. So what's the control like?

Pushing to the left on the joystick (there's no re-define key option, and the ones you're given are horrendous) opens the throttle and revs up on the tachometer. Pushing forward and firing selects first gear. It's off road Number One (there are three to choose from) in the easy section. I'm picking up speed very nicely, thank you, and I think it's time to change to second gear. Forward on the stick, fire, and back to the right for full revs Yo! I'm hacking along! (Well, doing about thirty.) Yikes - there's a dirty great hill! Up, up, up. Hmmm, time to change back down to first again - back on the stick and fire. That's better - the bikes really pulling again. Yikes, it's the crest of the hill, and I'm steaming. Ally-opp! Up in the air. Left and right now controls the inclination of the bike. Back, back, back - let's get the front wheel up for a nifty Eddie Kidd type landing. On dear, too far - it's going to be more of an Evel Kneivel landing. Blammo!

The course is littered with other hazards such as little holes in the ground, which have to be taken at very slow speeds and bunny-hopped over, wheeling the front wheel over them and then popping the back wheel over as well (left and fire on the joystick). All the time you're riding it's a good idea to have your eye on the middle strip, as you also have to steer the bike left and right to avoid brick walls and such like. You can only perceive this lateral motion from the birds-eye view, and in more difficult obstacle course levels you've got to weave around all over the shop while keeping your attention equally focused on the side-view screen 'cos you've got bunny-hops to do at the same time.

There are 15 courses to be completed in all, ranging from quite hard to flippin' murder. The graphics in the game could be described as somewhat rudimentary. I found they worked quite nicely but could have been better. The sound's just the motorbike engine (the whine goes up and down depending on the revs), and a little tune plays when you crash. Everything scrolls well, and once you've got the hang of the control system it's quite an addictive little jaunt. It'd be brilliant if someone could produce a hybrid of this and Enduro Racer, but Super Scramble Simulator will keep me going for now!

BBC's Kick Start on the Speccy. Quite a challenging and fun Trials Riding game with barrels of addictiveness hiding behind its slightly unpolished visual exterior. Vrooooom!

Quite a challenging and fun Trials Riding game with barrels of addictiveness hiding behind its slightly unpolished visual exterior.