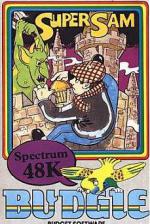 This is an odd game. I initially thought it looked pretty boring, as I spent a while wandering through the same few screens, not really getting anywhere.

But, once I fell down a manhole and found myself in the bowels of a castle, the game started to become quite enjoyable. I'm not sure quite what the plot or purpose behind the game is, as my review copy had no notes with it, but Super Sam seems to be a maze game with an assortment of objects to collect.

There's nothing outrageously original here, and the graphics are quite old fashioned and blocky, but the variety of the screens took me a bit by surprise. One minute you're in a screen that looks like it's straight out of the old "Horace" games, and the next, you're in a pseudo 3D maze trying to avoid some odd looking sprites with hats on. What the authors of this game seem to have done is to bring together bits of a number of old games and strung them together to produce a game that isn't at all original or outstanding in any way, but which is nonetheless quite amusing.

There seem to be quite a large number of interconnected screens, though I'm not sure exactly how many, and they should keep you occupied for a while. This isn't a great game by any stretch of the imagination, but, at a budget price, it's okay for a few undemanding hours' play.

This isn't a great game by any stretch of the imagination, but it's okay for a few undemanding hours' play.