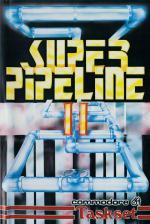 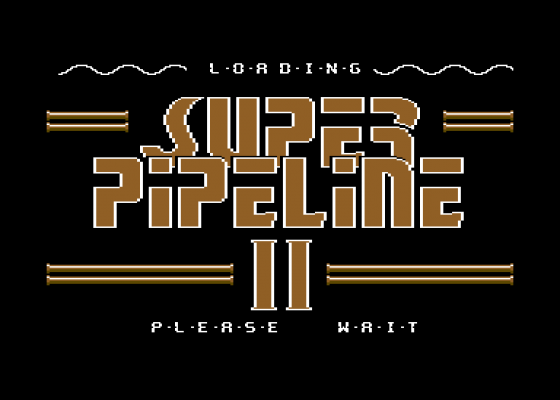 At first glance it seems as if this isn't any different from its predecessor. On playing the game, though, you soon notice, and feel, that it is.

The original Super Pipeline had you in control of a foreman and helper, maintaining a flow of water through complex pipe networks, in order to fill a barrel. This sequel follows the same theme, but is superior in every way.

You still control the self same foreman, only this time you have two workmates to help you. One of the game's most appealing features is the way they tag along behind you, mending broken pipes where necessary, and intercepting otherwise fatal nasties. Getting them to do exactly what you want and when you want it, takes considerable skill. 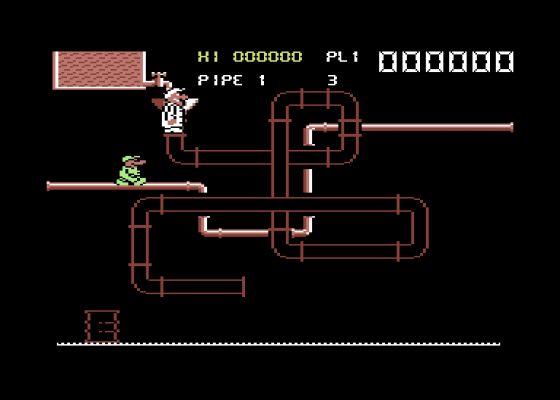 At the top of the screen is a tank containing a supply of water. This supply is constantly flowing through a tangle of piping, where it will pour into a waiting barrel. Depending on which level you're on, there can be between one and four barrels to fill.

Things are not so simple, though, as unpleasant objects roam the pipes and must be shot or avoided. These things are in fact tools of various descriptions. Some cut holes in your pipe and allow the water to escape: this calls for immediate action, so you must lead one of your workmates along to repair the damage. Even under the attention of his hammer, holes take time to seal, leaving your henchman open to attack from hostile tools.

If you spring too many leaks and the water supply level should get too low, all water will start to flash and your score will decrease. If you don't fill all the barrels before your score runs out, then you'll lose a life. 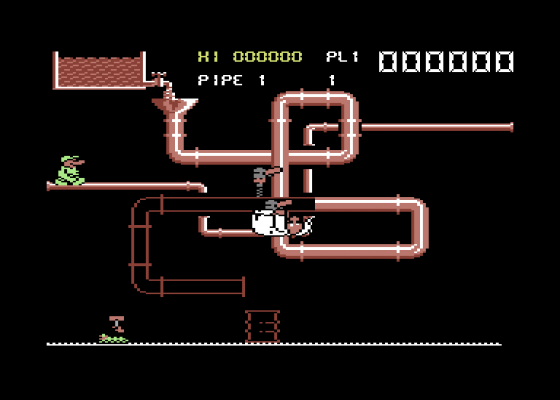 Once all of the barrels have been filled, one of eight excellent and humorous intermission screens is played, and it's onto a longer, more twisting pipeline.

You can start with between one and eight lives and there is a one or two player option. An amusing and brief set of instructions exists within the game, and some excellent, detailed ones come on the inlay.

The graphics and sound have both been improved greatly. Sprites are large and have excellent definition and animation, each being outlined and well coloured. The effect of water flowing is superb, and the animated intermissions have real class - in one a Sinclair C5 trike gets sledgehammered by one of your workmates, while in another, caricatures of the Taskset team prance across the screen.

The quality music is easily recognisable as being that of Taskset, and four or five jaunty pieces are played throughout the game. The sound effects are very good, and very unusual.

The original game was brilliant, and this improved version takes the game to new heights of excellence. The graphics are superb and I loved the humourous touches at the end of each screen. The varied nasties and complicated pipes make this much harder than the original and even more fun. The music and colour are marvellous as usual, having a real arcade feel to them. If you haven't seen the original then you're in for a real treat, and even if you have you'll love this new version.

Supersmooth slick graphics and catchy tunes instantly attract you to this game. There're plenty of complicated and challenging screens, which will keep many perplexed for months to come. I found this game fun and enjoyable to play, apart from one thing. The transition between the easy screens and the difficult is rather sharp, and dying on the same screen game after game was annoying.

There are 16 different pipe networks (compared with eight on the original), and dozens of evil nasties to contend with. Even after days of extensive, exhaustive, and exciting play, I can't get past screen 13 (and that's with eight lives!). In other words, it's tough and enjoyable enough to keep a wide range of arcade gamesters busy.

The game features a large number of hostile tools and, as is the case with the other sprites, they are graphically wonderful. Power drills, buzz-saws, pneumatic drills, blowtorches, and a host of others, all try to cut holes in the piping.

Other, less destructive tools - among them plungers, spanners, toolboxes, caterpillars, and hammers - merely wander aimlessly around the pipe and contact with any proves fatal. There are also appearances from the lobster and spiders from Pipeline I (especially on later levels), plus the introduction of some newer problems. A cluster of tacks make an appearance on pipe five and follow the path of the pipe. They cannot be killed though - they must be skilfully avoided or intercepted by an expendable workmate.

Originality 32%
The basic idea is the same as in Super Pipeline.

Value For Money 88%
State of the art arcade game. Enormous appeal whether or not you've already got Pipeline I.

Other Commodore 64 Game Reviews By GP 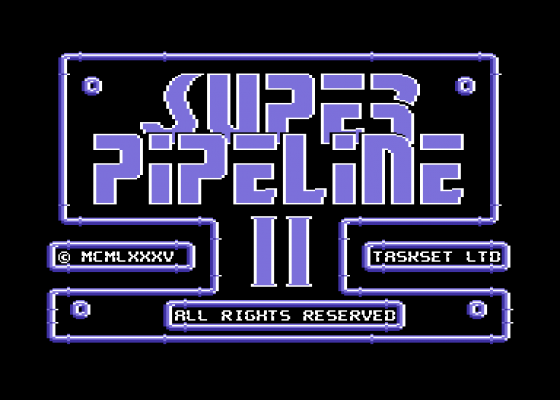