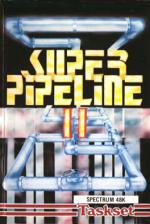 Super Pipeline became something of a cult game on the 64 and gave software house Taskset a big following. The Spectrum version of Super Pipeline2 is the first ever game Taskset have done on the Spectrum, and is a conversion from the 64 version of the same name.

In Super Pipeline 2 you are in charge of a gang of busy workmen who repair various long, convoluted pipes that get damaged by the nasties that come from all angles. Some of them are harmless to the pipes but not much good to yourself or your team, whereas others, like the two types of drill, make holes in the pipes. This is a Bad Thing because water is flowing down from a cistern at the top left, through the pipe, to issue at the end into a barrel. The object is to fill the barrels) before the supply in the cistern runs out. It takes a while for the water to run all the way through the pipe, so nothing is being wasted if holes are made before the water reaches them, but after that precious time and water is wasting.

To repair a hole you must guide one your workmen to the hole, at which point he will start hammering away and repairing it. It takes a few seconds to repair, and in the meantime you must protect him from the predators. This is done by using your blaster which, however, may only be fired left and right which puts you in a vulnerable position while you are climbing up or down a pipe. The workmen run on to the screen and dash around the pipe complex until they are either snatched by a nasty or come up against you, in which case they huddle at your back until led off to a repair job.

When a barrel is filled, a tune plays and various inter-screen animation sequences take place. Each subsequent pipe is longer and more complicated than the last, later ones require more than one barrel to be filled, and of course there are more and nastier nasties. Lobsters can only be shot up from behind and the tacks are completely invulnerable.

'This may sound like a betrayal, but we ought to admit that there are some games where the graphics work so well on the 64 and less well on the Spectrum - the reverse is also true of course. SuperPipeline 2 is such a game. I do play games on the Commodore, and this looks so much better on that machine. Anyway, having said that, I think Taskset have done a good conversion of this madly addictive piece of frenzy. I always enjoyed the way your workmen have a mindless mind of their own, and true to British style- there's never one around when you need one! Niggles are that the horizontal pipes are hard to get onto, control is slightly tricky land it is a test of your joystick tool, and if there are a couple of workmen sheltering behind you, their characters overlap, making it hard to see the damned pipe!. Still, it is an addictive game, a playable one although a bit tough because of the things I've just mentioned, one well worth getting.'

'This was one of my favourites on the CBM. The Spectrum version has not done too badly either, it has very good cartoon like graphics which are well drawn and animated. The sound is very good for the Spectrum but it leaves a little to be desired. Playing the game is as manic, or more so, than the CBM64 version and l am very addicted to it as it is so playable. It has little sequences at the end like 'Pacman' which are very jolly. My only niggle is that when you want to cross over to another part of the pipeline you have to move your foreman exactly to the right position or else he won't move at all so if you aren't very good at playing or you have two workmen following you (so you can't see the pipe) you tend to lose lives as it takes time to get it right.'

'Super Pipeline 2 is a fast, addictive and very difficult game to play. Graphics are along the usual pipeline style but plenty of nice animation and colour. The meanies are extremely vicious and at first I thought the game was too difficult to play - I still do! I soon got very frustrated with because as soon as I had plugged one hole, another appeared. The water pouring out is realistic and nicely described. I found the up and down a little hard to get the hang of - a bit finicky. A nice game but a little too difficult for my liking. Frantic plugging!'