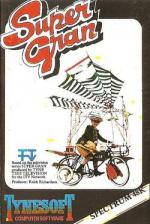 Not that CRASH readers get much opportunity to watch television but you may have noticed a Television series called ' Super Gran'. It is based on the unlikely adventures of a turbo charged Grandmother. The story began when she was sitting in the house feeding something when she was accidentally zapped by a special ray fired from the upstairs room of a tenament block. The ray was in the care of one Mr Skunner Campbell, the bad guy of the game. Skunner in his turn had pinched it from Professor Black, the ray's inventor. Anyway enough of this, the fact is that the otherwise quiet and feeble Granny was instantly convened into a mega-being able to perform feats that make Daley Thompson look like our assistant editor. The game is based on the dear old lady's adventures, her attempts to put right wrongs where no Gran has righted wrongs before.

The game consists of five different game-screens and you must survive each pan to move onto the next. First off, Gran flies over Chisleton on her flycycle, battling it out with an imposter Gran on a similar machine. Screen Two sees you equipped with an anti-gravity belt which, when activated, allows you to drift up. Turn it off and down you go again. You must stop cars running over the cats while at the same time dodging planes and balloons. Gran can move left or right, but only when hovering, the background scrolling behind her.

The third game uses a scrolling road. The Professor is trying to get his new invention to the science exhibition and your task is to guide him there, avoiding the pot holes and kerbs as you speed along the winding way of course Skunner is making a nuisance of himself. Onto the fourth here you must scale a cliff to recover the invisibility machine left at the top. Moving from ledge to ledge, you find yourself facing all sorts of perils weak ledges, nasty animals and the like. Mr Skunner has gone to the massive expense of hiring a helicopter from which he drops bombs on you. On top of all this the tide's coming in so don't dally. If you manage to get hold of the machine then its powers may help to defeat the mob on the next screens, all of which follow similar themes.

Moving from ledge to ledge, you find yourself facing all sorts of perils weak ledges, nasty animals and the like.