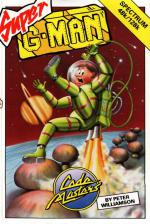 Frolicking with his jet pack, G-Man missed the last space shuttle. Now he faces a hazardous expedition across the moon, which is infested with aliens.

G-Man can thrust upward, and accelerate or slow his forward speed. And he can increase his jet pack's fuel by touching fuel cells on the lunar surface.

As he moves across the moon, G-Man encounters piercing rock escarpments, yawning chasms and land mines which threaten his three lives. These inanimate dangers are supplemented by green hollow worms, the giant Slowest-fish. vertically-firing missiles, fireballs and horizontally-flying hardware.

All can be blasted, but G-Man needs plenty of ammo, which he must acquire on his adventures.

G-Man's progress on this scrolling-screen moon world is shown on a distance indicator.

Entering a teleport cubicle moves him at the speed of light - though it might lead G-Man into an uncomfortable situation.

'Super G-Man looks like a failed O level Computer Studies project! The graphics are awful, and the scrolling is jerky, messy and unattractive. And though the sound is better then you'd get from a 15-year-old schoolperson, it's way below the standard I'd expect from a pro. This isn't worth a fraction of the price.'

'Super G-Man is one of the best games Code Masters have ever produced. I love David Whittaker's music in small doses, though having it non-stop is beyond a joke. (You can't turn it off.) The graphics are reasonable, and colour is used well though the scrolling colour doesn't really work. The music is the best thing.'

'Super G-Man is a poor Jetman variant. The scrolling jerks along merrily, the graphics are small and not very impressive, and the title tune is annoying. The idea is simple, and Super G-Man is an easy-to-play package - but it soon becomes dull.'

The idea is simple, and Super G-Man is an easy-to-play package - but it soon becomes dull.