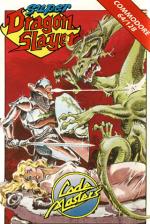 Life can be boring sometimes, can't it? Don't you just wish that something exciting would happen every now and then? That's what our princely hero in Super Dragon Slayer thinks. Ligging around in the palace all day with nothing to do can get incredibly tedious at times... Ho hum. Wait! What's that? A cry for help from a damsel in distress? (Princes have an ear for this kind of thing!) This is it! Off *to the rescue*!

In Super Dragon Slayer, you take the part of a brave knight who goes off to save a fair maiden and defeat a dragon. You must battle your way through a land of hazardous landscapes and fierce monsters intent on your destruction. Occasionally, on shooting a nasty, an icon may appear to help you on your quest with temporary shields, extra energy or a spell.

Spells give you additional magic powers (you're also a magician as well as a prince, see) enabling you to blast monsters, clear the screen, turn into a frog for an almighty high leap, or fly like Superman, depending on your magic status. To progress to the next magic level (and the next piece of scenery) you have to battle to the end of the landscape and defeat a bunch of fiercer monsters, otherwise it's off to the big adventure land in the sky!

My initial reaction to this game was "So what, another Green Beret clone. Big deal!" but when I reached the end of level one, I discovered that there was more to it than meets the eye.

The graphics in the first scene aren't too great, but they improve the further you go, and the sound could have been a lot better, but when it comes to the crunch, this is quite playable.

It does take a while to grow on you, but if you persevere you could get to like it. The only problem is the price.

If it had been the normal Codemasters £1.99 instead of its five quid ticket, it would have been great, but there's nothing really to justify the extra cost.

For this reason, Super Dragon Slayer *just* misses the boat.

Codemasters ads for the 'super' £4.99 games usually boast of wonderful extra features which are deserving of a higher price tag.

Super Dragon Slayer's extra features consist of a choice between novice or expert difficulty levels. Whooooo! How can I contain my excitement?

The game itself isn't too bad though, if you can get over the average graphics and tedious sound, that is. The extra features sometimes come as a surprise and you often find yourself having another game to see what comes next.

However, I'm still trying to work out why they've given it a higher price. It would have made a great little budget game, but as a more costly product, it's not so great.

So Codemasters, work out your marketing strategy a little more carefully (Irony warning) and you might make it big.

Presentation 49%
Not much glossy wrapping and the controls are fiddly at times.

Graphics 61%
Occasionally bland and blocky, but quite good on the whole.

Hookability 53%
A mite tedious to begin with...

Lastability 71%
...but it stands a chance of growing on you.

Overall 67%
Not a bad game at all. It would have been even better at a proper budget price.

Not a bad game at all. A mite tedious to begin with... but it stands a chance of growing on you.