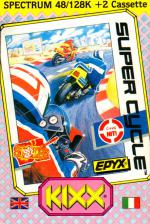 It's probably unfair to criticise a game that has been superseded by later better titles but why should that stop me having some fun? Actually Super Cycle isn't bad, but since Enduro Racer this sort of standard motorcycle racing game with all the usual features - smallish sprites, dreary old roads with no foliage or scenery to speak of, and no bumps or rocks in sight - has become more than a little tiresome. Snore city, in fact. What's worse is that there have also been 345,000,000 identical games released since Super Cycle first appeared three years ago and impressed us all.

Some games survive, some don't, and at three quid this now looks overpriced.

Some games survive, some don't, and at three quid this now looks overpriced.