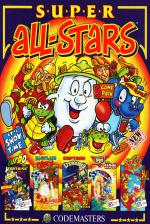 What can be said about Captain Dynamo that hasn't already been said? It's a cracking platform game featuring an aged, tired super hero named Dynamo. Who, to save the name and precious stones of a fairly decrepit old dear, Lady Phyllis Uppenhofen, of planet earth, has come out of state retirement and donned his cape and springy boots once again.

The problem is that a mad scientist type, Professor Austen Von Flyswatter has run away with all her goodies and set up base on the moon. Surrounded by all the trappings and, for that matter, traps associated with evil computer game villains Austen proves difficult to defeat.

Dynamo has great graphics, great provability, great sound and a lot of quirky hidden bonus rooms and wacky features that make it a superb budget bash.

Oh, oh dudes, the Evil wizard Zaks has returned to haunt the Yolkfolk, trapping all of them, except for our intrepid hero, in various situations, Dizzy as usual, has to leap and bobble to the rescue and foil Zaks' dastardly plan for poultry produce domination. This is yet another classic Dizzy romp, it looks good and the old format isn't tired yet.

It'll still take some investigation and churning of grey matter to solve the multiple riddles involved. How to stop Dylan being a bush? How to stop Dora being a frog? These are the questions you'll ask yourself in Magiciand Dizzy.

Steg is a Code Masters special. Not blessed with the same logic as the rest of the world, Big Red and their task masters managed the impossible - a cute slug. Several in fact, as the whole idea of Steg is to breed and feed little slugs using the millions of maggots found in the Stegtown sewer.

This sewer is a strange place, with spikes and self animated bellows around every corner threatening to deprive t'yung'uns of food. Steg captures maggots by blowing bubbles which trap them and then allow them to float all the way back to his (or her, Codies never did work out Steg's gender) nest. Although Steg's quite hardy and difficult to damage these bubbles are easily burst and thus must be guarded all the way home.

Again, exceptional graphics and game play for a budget game are the hall marks of Steg reviewed five months ago as an SU Gold with 90%.

Turbo The Tortoise is another weird but wonderful game, this time not from the clear Leamington Spa air induced brainstorms of Codies but from Hi Tech in the grim north. However the game's profile fits Codies' modus operandi perfectly and it's wicked too. A sure fire combination.

Turbo used to be a normal everyday tortoise until his mad professor owner conducted a few borderline experiments which, presumably, the Body Shop wouldn't be too keen on. Anyway to cut A long story short our cute shelled reptilian becomes bionic and sets off to recover parts of a time machine invention his master has lost.

Graphics aren't completely top notch but the gameplay and planning are. Somewhat reminiscent of Yogi Bear, Turbo is a fun game. A worthy addition to Super All Stars.

Finally, and it's a very close thing I might add. CJ in The U.S.A. weighs in with a fast, fun packed platform romp. CJ, a young trunk from Africa was away from from home one day when suddenly he heard some big bangs coming from the direction of his house. When he got back he discovered his family had been kidnapped. Using his amazing elephantine powers of deduction and with some friendly advice from the neighbouring wildebeest herd he followed the kidnapper's trail all the way to America where he must proceed to free his family.

There are four levels based all 'round the States including tours of New York, Chicago, San Francisco, Los Angeles and Florida. Graphics are sometimes rather basic but the main sprite is fun, with his folding umbrella, and the playability factor is all there.

This is a collection and a half. All of these games have been highly recommended in SU before now and even if you already have one of 'em it's still well worth getting the pack and saving a few quid on the rest. This is gonna be on my Christmas shopping list and no mistake!