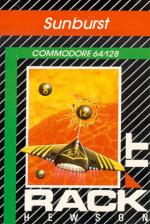 Rack-It's release this month is a multi-directionally scrolling space shoot-'em-up which centres around a series of star systems, each with a huge sum at its centre.

The first system, a bubble-like alien environment, is home to a vicious race of beasts - spinners, phantoms and octopods to name but a few - who home-in on the player's ship, depleting its energy on contact. If too many hits are sustained the vessel is destroyed.

The aim is to survive attacks from these aliens and to destroy the carriers, a species that transports energy around the system. Blasting these leaves a decaying energy pod that remains intact for ten seconds. When enough pods have been collected, as displayed on an energy meter, the ship is guided into the sun, which vaporises. With the mission accomplished, the player moves onto the next, more difficult level.

Sunburst is very smart-looking game with brilliant scrolling backdrops and some really neat sprites. The gameplay is a touch repetitive however, and is also marred by some dodgy collision detection - the ship sometimes explodes without touching anything. Entertaining for a while, but doomed to end up gathering dust on the software shelf.

Entertaining for a while, but doomed to end up gathering dust on the software shelf.