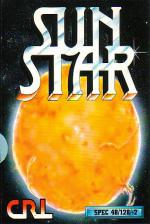 Way back in the mists of time, a company by the name of Ocean released a game called Transversion. In the game, the player had to fly around a grid colouring lines. I always wondered what it would be like to be in that ship, racing across the lines and now it looks like CRL has granted my wish.

In Sun Star you get to fly around a grid collecting energy crystals and shooting thingeys. Wow! Sounds OK. Does it have astounding graphics? Well, no, it doesn't. It has a few lines drawn in perspective to make a grid and whatever colour fills in the gap defines what is in the square, ie. blue is a wall, green is an energy pulse, etc. So, the game relies heavily on colour. Unfortunately the Spectrum cannot come up with the goods and comes up with colour clash or blank spaces. Not one of CRL's best.

Technically sound idea but the Spectrum hasn't the capabilities to carry it out.

Technically sound idea but the Spectrum hasn't the capabilities to carry it out.