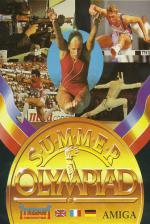 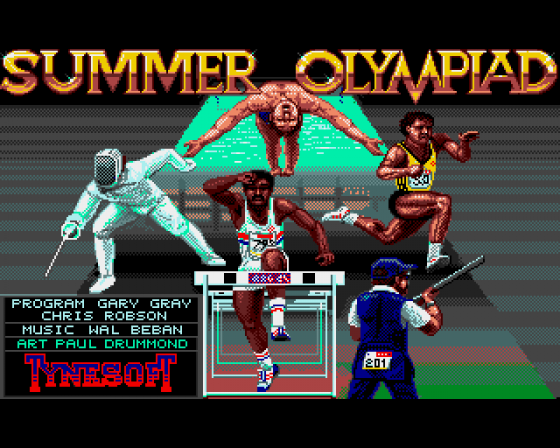 Aaaagh! The Olympics are over... Lucky for you then that competition's only just begun. Tynesoft are letting you have a go at five different and demanding Olympic events.

This is ordinary competition, though. For a start you don't have to compete in all the events. Not only that, you can decide from one game to the next what country you're playing for (no messing about with citizenship and visas here).

First off you grab your rifle and try your hand at Skeet shooting. 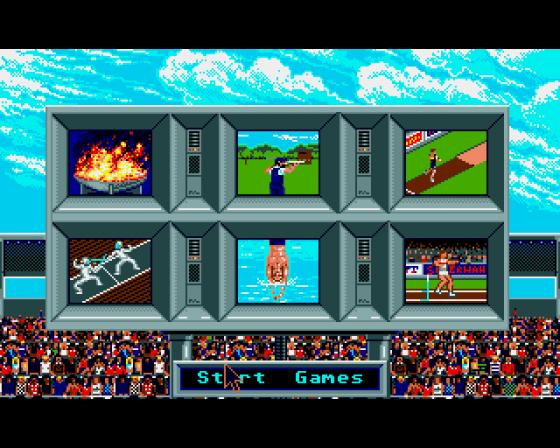 When you've blasted all the clay pigeons from the sky, you've ust enough time to get into your shorts trunks for the triple jump.

Press of the fire button and you're in the fencing arena. Watch out for the American guy - he really knows how to lunge.

Next you're on the diving board. Get turns in, or you'll be the one with zero points. 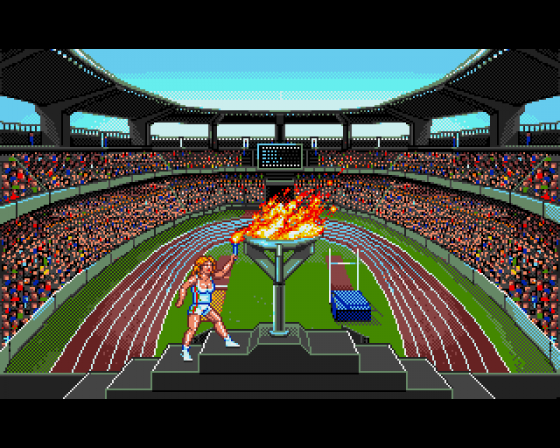 Hope you're not one of those guys who feels sick after swimming because you've hardly got time to catch your breath before you're out on the track. Finish the hurdles and you might just be in with a chance of a medal. There again, you might not.

Yeah! I really enjoyed watching the Olympics so I jumped at the chance of being able to compete in all those fantastic events. Great! 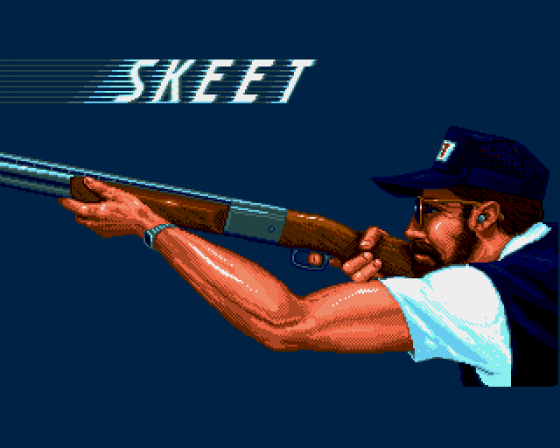 You can be dead athletic and still not get out off your chair - just the way I like my sports. The presentation is pretty unusual too - I mean, how many times have you played a hurdles race viewing the action from the back?

In fact, it's just this fresh angle on most of the events which makes Summer Olympiad so challenging to play. It doesn't work equally well for all the sports - the fencing seems to come out worst - but when it does, it's great.

Personally, I like the skeet (a lot more difficult than Epyx shooting events) and the diving best. 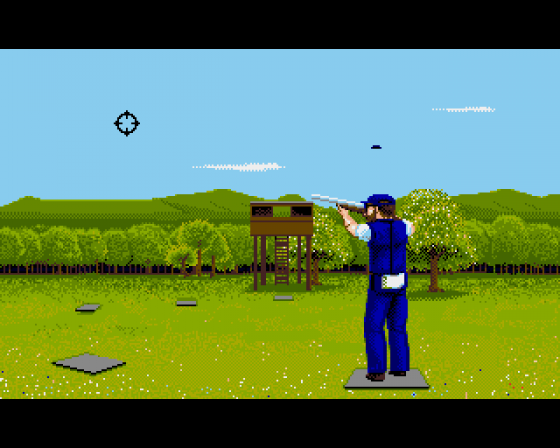 Though Tynesoft haven't actually managed to include a full Olympic repertoire or even an Epyx-style menu of events, I have to throw down my cask of Newcastle Brown Ale and say that what there is of this is pretty, prett-y good.

All five events are really unusually presented and not at the expense of playability either. You don't even have to remember as many complicated joystick operations as has been known in other mega-games simulations: you know the sort of thing - all that rotate the joystick while pressing the button and pushing the Commodore key to wiggle your bum at the audience sort of stuff [Er... yeah, Paul, yeah - Ed].

Anyway, if you're in the slightest bit sporty (or even if you're not, like me) you could do a lot worse than give this a whirl. 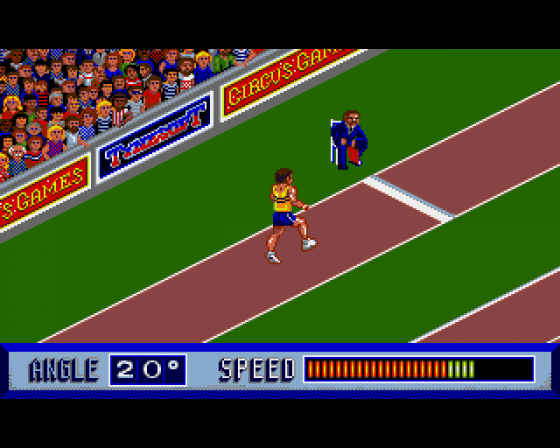 Presentation 82%
Attractive loading screens, opening ceremony and options to play (and replay) any number of the events with up to six competitors at any one time.

Hookability 76%
Excellent graphics and easy-to-grasp techniques (except for the triple jump) make this an immediately attractive buy.

Lastability 74%
Even if you don't want to keep competing in all the events you should be playing your favourites for quite some time.

Overall 76%
A fresh view on an established game style. Take a look.

A fresh view on an established game style. Take a look. 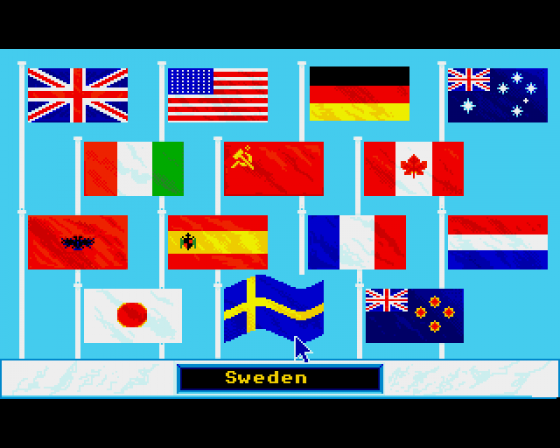 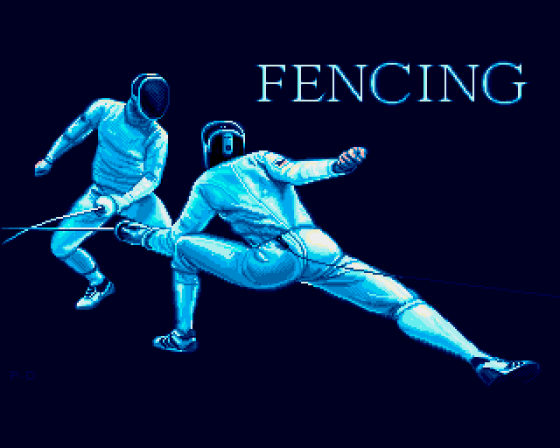 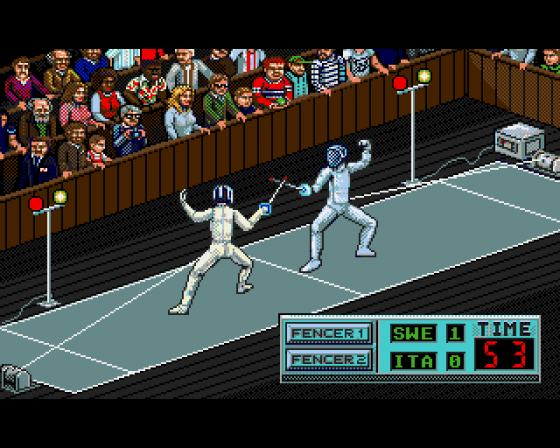 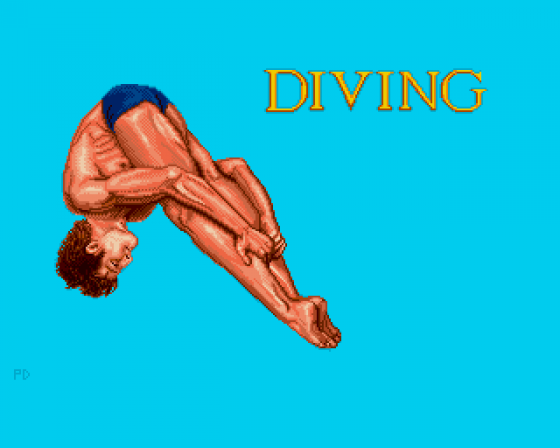