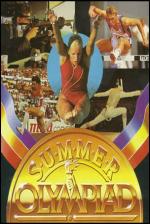 As you read this, all being well, the 1988 Summer Olympics will be well under way. You, and up to five other people, can now take the place of an all-round athlete who has qualified to compete for his country in five events. Having entered your name(s), the flag of the country you wish to represent (one of fourteen available) is chosen. The events you compete in are then selected and the Games begin.

Skeet shooting comes first. Clay pigeons are launched from the left and right, just asking to be shot. You aim with a joystick-controlled cursor from seven standing points. If all pigeons are hit, a bonus clay is awarded.

The co-ordinated sprint and leap of the hurdles is the most strenuous event you have to face; its rigours are simulated by waggling the joystick from left to right, timing presses of the fire button to jump the obstacles.

The complicated movements of the triple jump and negotiated in a similar way, speed being gathered on the run up by joystick waggling. As near to the take-off board as possible, the fire button is held down to give the desired angle and the hop, step and jump movements are then made automatically.

From a 20 metre tower, you have to perform as many aerial twists and spins as possible to impress the diving judges. From launch, movement are selected by combinations of joystick direction and fire button. A clean entry into the water is needed to gain a respectable mark.

The noble art of fencing is the final event, played against a computer-controlled swordsman. Defensive and offensive moves are available, and your aim (quite simply) is to hit your opponent more than he does you.

Gold, silver and bronze medals are awarded after each event and accumulated over the selected sections.

This has some pretty original viewpoints - for example, the fencing is shown from a camera's viewpoint looking down on the action from a corner of the piste. The definition standard does vary from place to place, but is generally representative of the real thing.

Epyx have cornered the market in multi-event sporting simulations but as they dropped their standards with The Games: Winter Edition, Tynesoft have a chance to gain a toe-hold. Some events are a bit old-fashioned, but some reminiscing coupled with new-style gameplay makes Summer Olympiad a worthy waggle.

Isn't it refreshing to see what a new viewpoint can do to a game? Summer Olympiad is a case in point, as each event takes a different perspective from any other sports simulation and, surprisingly enough, this makes it seem more than just a recycling of old ideas.

There are a few awkward delays that slow things down somewhat and a mis-timed press of the fire button means that a particular event must be played from the beginning again. Having said this, the events themselves are very well presented and enjoyable, the hurdles being the only runt of the litter (I can't understand how to win, and there aren't any instructions on the sheet for the event!).

It all boils down to that well-used phrase of "try before you buy". See if you can ignore the quirks and get down to the game in hand, as it is quite a lot of fun.

This type of sporting game has a long history - and it was obvious someone would dig it up to cash in on the '88 Olympics. To be fair to Tynesoft, they've made a great attempt at producing a multi-event sports game with a different graphical viewpoint from most others.

Definition is admirable all round, skeet shooting being the best presented and also the most playable event - despite numerous wasted shots on first games, I went back to it time and time again. Diving requires some nifty manoeuvres to get anything like a decent score, but landing on your back, as I often did, spoils an otherwise good performance - zero marks all-round!

The other events are rather predictable interpretations, paricularly the waggling and button pressing of the hurdles and triple jump. Summer Olympiad is worthy of attention if you are short of such games.

Sound 85%
A variety of quality tunes to suit each event.

Hookability 92%
The thrill of Olympic competition is generated between players.

Lastability 84%
To strive for perfection is the sporting spirit. [Whaaaat? - Ed]

Some events are a bit old-fashioned, but some reminiscing coupled with new-style gameplay makes Summer Olympiad a worthy waggle.