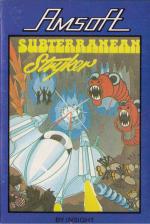 Here's yet another cavern caper that combines the talents of many games to make a novel new challenge. The aim is to fly a 'stryker' plane through the twists, turns and obstacles of an underground complex, trying to rescue humans.

The display shows the planet surface with the stryker above it. At the top a Defender-style scanner shows you where hostile moving aliens and the humans are. The craft can move in all directions across the scrolling landscape as long as it avoids crashing into aliens and objects.

The aliens cruise the planet surface and caverns spouting bombs like landers in Defender. They can be shot using a forward firing laser but any contact with them or there bombs means the loss of a ship. There are also other instantly deadly objects like burrowing worms, dripping liquid, spiders, bubbles and bullet-like doors. These all tend to block narrow passages and have to be snuck past as they move up and down.

Non-moving scenery is not so fatal and your shields can survive many brushes with it as you race around the caverns. However a head-on collision burying the ship in a wall will still end in disaster. Most of these passages and even the moving objects can be avoided but with the random aliens thrown in it gives more problems.

There are eight humans that have to be rescued on each level of cave and they are always shown hacking away at the ground with a pick axe. Slave labour presumably. You pick them up by just touching them with the ship. When all eight are aboard an energy gate will disappear from a section of cave allowing the ship to pass to the next section.

At the beginning of each section you are given a new shield and fuel but in the underground areas there are nozzles where you can pick up more fuel and energy for the shields. If you hang around for too long on a level the alien command saucer whizzes out and attempts to ram the stryker. When a life is lost the ship reappears at the entry gate to that level.

The scrolling around the caves is very jerky but the caves themselves are well-designed and full of interesting features. There's not much sound except for bangs, crashes and the hum of your ship when it moves. The gameplay calls for a mixture of dexterity, fast movement and good reactions.

Well, it's a nice try at something new by mixing a lot of familiar elements. If it's not quite successful it's because it's neither one thing nor another. Or even anything else. Some pretty trees don't really make up for the nasty firing and jerky scrolling.

P. Lots of difficult sections to crack.
P. Well-designed caves.
P. Novel, well-drawn obstacles and men.
P. Gradual damage feature makes a pleasant change to instant crashing as does the lack of inertia on the ship.

N. Scrolling is very jerky.
N. One wrong move under an obstacle and you're dead.
N. Aliens can be annoyingly random sometimes making an area impossible to pass.

Calls for a mixture of dexterity, fast movement and good reactions. Scrolling is jerky.