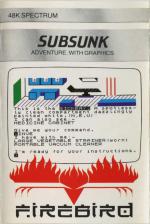 Sub Sunk is one of two cheap offerings from British Telecom's Firebird label reviewed this month. This is probably the better of the two as it concerns itself with just the one immensely engaging activity that of escaping from a sub sunk to the bottom of the sea by a surprise enemy attack.

You are Ed Lines a reporter from the Seafarers Gazette on board the Sea Lion assigned to write an in-depth insight into life aboard a modern working sub. An alarm bell rings and before the sub can submerge the crew are overrun by the enemy who fail to find our intrepid reporter hiding under a bunk in the wardroom. Your prime objective now is to get to the telex room to send the message that will bring a rescue party. The message is: sub-sunk.

Up and running, the program has an attractive appearance on a b/w TV, but bright white glares too strongly on a colour set. Since this review is on the whole favourable let's just say I played the remainder on a b/w set after the glare of the coloured instructions, and in monochrome, all looked well. For an inexpensive Quilled game the graphics are presentable and sometimes rather good (as in the sickbay and the cold store). What's more, in places like the control room, with its sonar display (and bleeps), and in the reactor compartment, the control panels show some life like the flashing control desks which lined every spare inch aboard the sub in Voyage to the Bottom of the Sea ("Captain, a huge octopus has grabbed the ship', 'don't just stand there, melt 10 lbs of oil and serve with a little garlic').

I must say, for the asking price I thought this game wasn't at all bad. The logic required to solve one or two of the problems was thin in some places and suspect in others but anyone who has played many adventures can soon get that self-congratulatory glow of satisfaction within a reasonably short space of time as problem after problem bites the dust. The balance between getting somewhere and solving problems is about right and on your travels you will find much to keep you interested and entertained. As you might guess the DDDeep FFFreeze CCCCompartment is rather cccold, so much so you are quickly returned back to the Cold Store before you freeze to a block. Most of the rest is freely accessible right from the off and almost all you care to examine, pull or otherwise fiddle about with causes something to happen, or gives an opportunity for the program to show off some new witticism. In the torpedo handling area PULL LEVER and 'whoosh! A huge column of air leaves the tube'. In the Control Room EXAM SONAR to find 'You're on the sea-bed matey!'. In the Navigation Area you can examine the map but the torn bits left reveal little that's intelligible. I can't remember a single location where something new wasn't discovered with only the most cursory poking around.

Sub Sunk is a much fairer attempt to bring adventuring to the cost-conscious consumer than, say, the offerings from Scorpio reviewed earlier this year. The graphics are by no means minimal in many locations they add to the atmosphere and make play more enjoyable. Almost everything can be examined and every lever pulled maintaining a high level of involvement throughout. Getting out of this submarine is a challenge and you could do a lot worse than devoting some of your Summer hols pocket money towards having a go.

The graphics are by no means minimal. In many locations, they add to the atmosphere and make play more enjoyable.