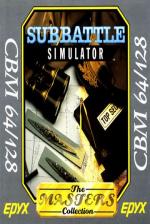 "So, there I was, captain of a German submarine in the first week of World War Two, hunting for British merchant ships in the English Channel. After two days' patrol, a lookout reported smoke to the north.

"My binoculars showed only clear blue sea, so I followed his directions. We pursued for an hour with the lookout getting more excited. Suddenly there was an almighty crash as we went aground.

"I checked the map, and we had just sailed 50 miles inland from Brighton. The lookout still reported the convoy, presumably sailing down the main runway at Gatwick Airport. I took another look through the binoculars. Nothing but ocean. I must get them fixed."

Of all the attack submarine games on the market, Subbattle Simulator promises the most. In charge of a World War Two submarine, the player must master the problems of manoeuvre and torpedo attack.

There is a training scenario, a set of special missions including picking up aircrew at sea and landing agents on enemy islands, and a "wartime command" scenario in which, if you survive your first patrol, you move on to a better submarine and continue your careet throughout the war. There are four levels of difficulty, and a selection of either American submarines in the Pacific or German in the North Sea and Atlantic. Your submarine can be attacked from the air, and you must recognise which aircraft are hostile. The earlier subs really do have worse handling and poorer torpedoes than the later models.

It sounds too good to be true. It is. Apart from showing the ocean when you are sailing on dry land - or even worse, almost on top of an enemy ship - the program is almost unplayable!

Course is set on a dial with a joystick, and is accurate only to about five degrees. Precision navigation, one of the main skills of a submarine, is impossible.

Submarine work alternates between long days of patrolling, hours of stalking a convoy, and minutes of very precise manoeuvring to attack or escape. For a game some form of time compression and a way of "zooming" in and out of larger scale maps is essential. The method chosen by Subbattle Simulator makes the game almost impossible. Time compression is reasonable up to one (realtime) second equals 30 seconds, but then it jumps to ten minutes, and to four hours, reverting each time to the smallest scale map.

This means that you either have to run 12-day-long patrols in the ten minute mode, or speed up and risk that a degree or two out in your navigation, multiplied by eight hours' sailing, will put you in Tokyo harbour in two seconds.

Even worse, once you have sighted a convoy the computer, not you, calls "battle stations" and locks you in tactical mode, with 30 seconds as the fastest speed. The basic submarine tactic of stalking a convoy all day to attack at night is not possible.

Subbattle Simulator is potentially a very good game. If it did what it is supposed to do, it would be highly realistic and very playable indeed. But it needs a lot more playtesting and debugging. I look forward to a second, improved version.

This has clearly been put on the market before it was ready. It shows the ocean when you are on dry land or, even worse, almost on top of an enemy ship. In fact, the program is almost unplayable!