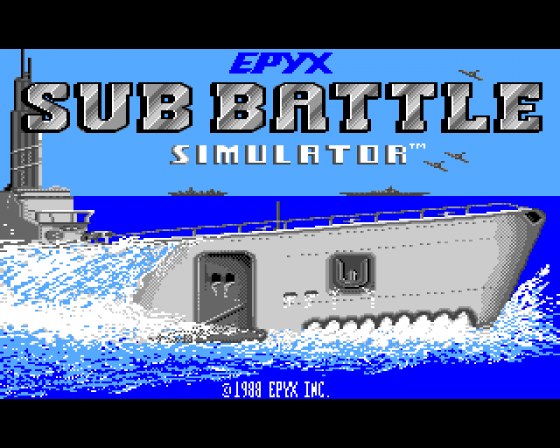 Relive the naval battles which made history in World War II - and without even leaving your armchair to enter the nearest time machine. This game gives you the Captain's cap and leaves you to it, beneath the waves of oceans seething with hostile vessels all eager to give you a good kick up the stern.

The gauges and buttons essential to the control of a submarine, such as depth, heading and speed indicators are all presented on one screen. Also shown are two sub-screens which display maps, a side view of the submarine, status readouts, Radar and Sonar pictures and exterior views from the top of the conning tower, through binoculars (7 x magnification) and, of course, through the periscope (yaaawn...) Also on the control panel is a message window which relays warnings and information from the crew.

In addition to a target practice mode, there are 60 different missions to complete, 24 in which you play an American captain fighting the Japanese in the Pacific, and 36 in which you command a German U-Boat against British and American shipping. 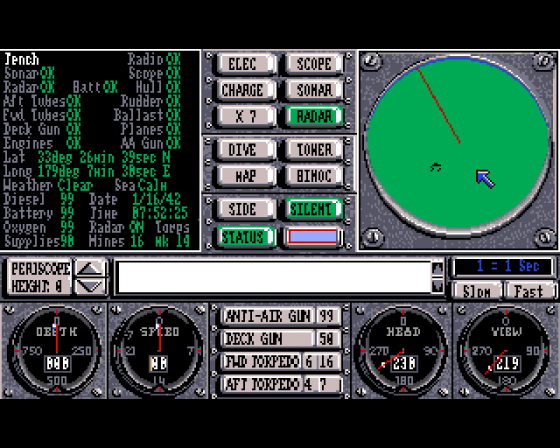 To combat the onslaught of enemy planes, aircraft carriers, destroyers and patrol boats, your submarine is equipped with forward and aft-firing torpedoes, a deck gun and an anti-aircraft gun. All are targeted and ranged automatically through the periscope.

Missions usually last for several hours and so the programmers have thoughtfully supplied options for loading and saving games to disk. 'Snice, innit?

Well, I'm sad to say it, but this seems to confirm that the Epyx label is no longer the mark of guaranteed quality it once was. It's not that Sub Battle Simulator is bad, it's just that it doesn't really have anything major going for it - bland and unconvincing graphics, no incredible sound, just lots of slow and rather uninteresting gameplay. 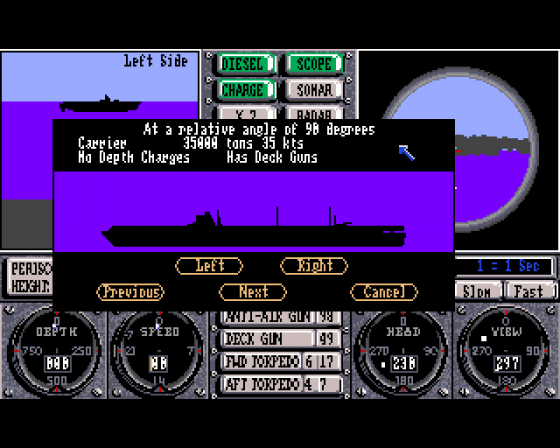 The speed at which the whole game runs is very unsatisfactory: selecting something like the Sonar display means several seconds of disk access, during which the game freezes, and in certain cases you can hear shells exploding around you and then see the shells exploding next to you about half a second later.

The very first line of the instruction manual says, "First of all, forget you're using a simulation.", but how can you when there are so many unconvincing elements which just should not be there on an Amiga game? If period naval warfare is your poison you might be able to stick with the game, but I doubt whether others will take to Sub Battle Simulator.

I've never been much of a simulations freak and I can't say Sub Battle Simulator has done very much to turn me into a fan. Having waded through the usual mountain of instructions, you're confronted with a slow, unwieldy control system that never quite responds in the way that you expect.

Worse still, the missions are really dull - nothing much happens for ages, and when it does it happens all at once. The graphics are about as functional as a trap door in a canoe but far less entertaining, and the sound, apart from the odd snorting siren, is unremarkable. Epyx have a reputation for producing some really excellent games - this just isn't one of them.

Presentation 69%
Keyboard reference guide comes in handy, but trying to keep all the controls on one screen has resulted in the display looking cramped.

Graphics 42%
Screen update is slow and ship graphics are only silhouettes, so they aren't very convincing.

Hookability 51%
Lack of atmosphere hampers the attraction of in-depth missions.

Lastability 57%
60 (wooooh!) challenging missions to complete, but nothing really exciting to do. 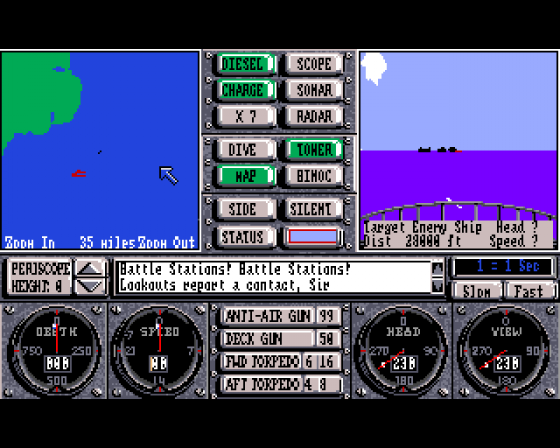