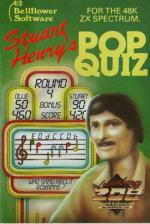 Are you ready pop pickers? Okay, here's the first question: whose real name if Freddie Bulsara? No, I didn't think you'd get it. It is, of course, Freddy Mercury. And with a name like that, it's no wonder he changed it.

That's just one of the 756 questions you'll have to wrestle with if you take on Mr. Henry's pop quiz. They aren't all quite so obscure as the one above. For instance, you can count yourself an utter pop music dunce if you don't know who starred in the film Summer Holiday.

The large number of questions is divided into several different quizzes, each of which starts with this program's gimmick - a mystery tune. A musical staff appears and, when you get a question right, you have the chance to fill in one of the notes. The only problem is that the burst of music is so short - only five or six notes - that it's very difficult to recognise it!

Players must remember to be careful typing in exactly the correct answer, although what the program considers correct is sometimes a bit puzzling. I typed in "The Kinks" in reply to one question only to be told that I was wrong, the correct answer was "Kinks".

Even though the program claims to contain 756 questions, you soon find the same ones cropping up in different quizzes, which doesn't do much for maintaining your interest.

But the whole thing is well presented in a straightforward way and there is a good cause to benefit from the sales - a percentage of the profit will go to the Multiple Sclerosis Research Fund, a charity close to Stuart Henry's heart since he suffers from the disease.

Even though the program claims to contain 756 questions, you soon find the same ones cropping up in different quizzes, which doesn't do much for maintaining your interest.