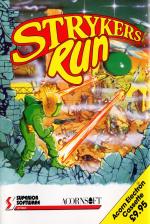 Hot on the heels of Galaforce comes another Superior/Acornsoft release in the form of Stryker's Run. After you've marvelled at the stunning graphics, is there any game left? Mike Roberts takes out his laser pistol and bag of grenades and has a look...

For many long years, a terrible war has raged between the glorious Allied Nations and the evil Volgan Empire. After much bitter fighting, a stalemate has occurred, both sides facing each other over a barren wasteland.

However, all is not lost. The Allies have succeeded in 'acquiring' the battle plans for the Volgans' next offensive. With this information, the Allies can break the impasse and win the war. You play the part of Commander John Stryker, whose job it is to take this top secret information from your advance position in the thick of battle to the Allies HQ safely behind your lines.

The game is based on the 'horizontal scrolling soldier shooting and grenading his way through thousands of enemy troops whilst being attacked from all sides' concept that is rather popular at the moment. The game also comes in two versions, one that runs on ordinary BBCs and a super expanded version that makes full use of the Master 128K memory.

Commander Stryker starts off wandering along the backdrop of scenery (more detailed on the 128K version) with helicopters in the sky, friendly and enemy troops dotted about, and mines on the ground. The graphics are in full colour and are some of the best solid colour graphics that I have seen on a BBC Micro.

To start with, you are on foot and can walk, duck, jump, lob grenades are useful for getting rid of the mines that appear sporadically - they could be used for getting our enemies, but this is not advisable as their range is limited.

The gun is your main weapon. It fires one, very slow, bullet at a time and has a range almost the edge of the screen. This range is slightly further than your enemies, so with careful positioning you can stand just out of range and blast away.

The little men can also come equipped with bazookas and mortars, which extend their range slightly. The main problem is not the foot soldiers though. The helicopters are the biggest problem, dropping huge sticks of bombs that are extremely difficult to avoid. At first I thought that it was impossible to avoid these, but after a while I found that there is a way - but I'll leave it up to you to find it out.

The thing that makes this game different from most other games like it, is the ability of the player to use certain items of equipment that he finds lying about. These are generally helicopters that are found on launch pads, and are substantially similar to the helicopters that are flying overhead. Entering these helicopters means that you can either bomb, shoot or both, your opponents in the air and on the ground. There are different types of chopper, some only bomb, some only shoot, and some are capable of both. Some are helicopters, and some are sort of hovering vehicles that can whizz up and down very fast. The 128K version even has an armoured car tht you can use!

The main problem with these extra craft is that you are extremely vulnerable to attack from the sky and ground as the target is so big. In the air you can be shot and bombed by extremely intelligent enemy aircraft, and if you are low flying you are at the mercy of enemy soldiers lobbing grenades.

There are also surface-to-air missile launchers to worry about - though the defence against these is to simply land and sort of skip along the ground below the level of the launchers. The advantage of these things though is very high, flying through the air bombing your opponents is much more satisfying than just shooting them.

As long as you can avoid the SAMs and enemy aircraft, and fly high enough to avoid the grenades and your own explosions, you will be safe as houses! One extra problem is that these craft have a fuel limit; however this is not a great problem as each craft has enough fuel to reach another craft (and beyond!) so that you can continue from there.

The backdrops in the 128K version are stunning with statues, monuments, enemy forts, a cafe and a ruined cinema showing 'Rocky 20' (Cert. 15). There is also more enemy junk lying about, some of which you can use, and some of which you can't - otherwise the game plays in a similar manner to the 32K version - with the exception that everything (craft, mines, and enemy soldiers) are in different places to the 32K version.

The 32K version has much simpler backgrounds and for some reason I usually get a lower score on it, but I don't think that it is any harder.

On the whole, this is an excellent game, and one that BBC owners will love to get their hands on as it is of the same - or higher - quality as that which owners of 'lesser' computers have had for some time.

With any luck, Superior Software's entry into the Comamspec area of the market will not slow the steady tide of excellent BBC software that they have been releasing in recent years - more power to their respective elbows.

An excellent game... It is of the same - or higher - quality as those games which owners of 'lesser' computers have had for some time.