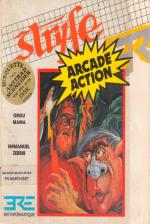 Even the French are into the Gauntlet-cloning business, but Stryfe's come a bit late to cash in on the success of the format. It's got the standard scenario of good vs evil, fantasy, demon, gnome and faerie that is completely irrelevant to the action.

It's a one or two-player game. I actually found it easier with just one. It's broken into sections, each composed of four screens. On each set of screens you'll find a silver key and a gold key. You must pick up the silver key before you can get the gold one, which in turn lets you open the door to the next set of screens.

You see the action from overhead, and the scenery changes as you progress through the levels. Among the buildings, vegetation and rocks you'll find other objects as well as the keys: treasure, potions and hams. The treasure increases your score, the hams replenish energy and the potions can be used against the monster generators.

Generators appear on all the screens and produce several types of monster. Some home-in and drain energy, others will shoot at you as well. You can destroy them with axes or lightning bolts, depending whether you chose the fighter or sorcerer.

As Gauntlet clones go, this is a bit too simplified. The game's fast and it's quite difficult to stay alive but it needs more to make it interesting. The graphics and music are good but you'll rapidly get tired of the gameplay. The most annoying thing in two-player mode is going to and fro through doors and working out who's going to pick up the keys.

The action is much faster than Gauntlet. Perhaps too fast. Two-player games are confusing - you tend to shoot your aide and mistake yourself for one of the monsters. Enjoyable, colourful, echoey stereo sound, but still a clone.

Easy to mistake the bad guys for yourself. But otherwise playable.

Staying Power 52%
P. A lot of sections to get through.
N. Gets repetitive and over-simple.

Overall 54%
N. Gauntlet clones have had their day.

Repetitive and over-simple. The Gauntlet clones have had their day.