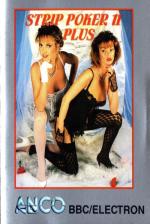 There aren't too many poker simulations on the BBC/Electron. There's Duckworth's Poker, which is a great poker game played out against five opponents in an old saloon. And there's the much more exciting looking Anco title Strip Poker 2 Plus, produced in collaboration with The Sun's Page Three girls, Sam and Donna. The game was released on all the major formats in 1990 and a friend of mine had the Amiga version, which boasted about fifteen different poses and high quality digitised 256 colour images. Whoohoo for the Amiga!

Sadly the BBC/Electron version runs in Mode 5 with a limit of four colours, meaning that, seventeen years ago, even the most lusty teenager still lumbered with an 8-bit would have some difficulty getting excited. The pictures are sepia-toned pixelations, with some care taken to 'line-dither' red, yellow and green in an effort to make areas appear darker. All told however, and particularly if one judges by today's standards, the pictures are fairly pathetic.

However, and despite not being a poker player, I waded into the instructions. Somewhat alarmingly, no rules on 'what combination beats what' are given. I recall something about two pairs being quite good and perhaps beating three of a kind from some drunken student days - but I also remember that different people play by different rules. Certainly one might expect Strip Poker 2 Plus's 'house rules' to be written down somewhere! The instructions only really concentrate on the principles of 'dropping', betting, 'calling' and 'raising' - and even these seem a little half-baked. Firstly they tell you to move using a joystick - at least I assume that's what the abbreviation J/S means - then they tell you to press the left mouse button to select. Considering the whole game is keyboard only, one really does begin to wonder whether anyone in the Anco team really cared about delivering a polished professional product when these blatant errors have slipped through into the text!

As mentioned earlier, choosing what bird you're gonna play against is your first task. The game then runs full screen with the top three quarters showing the digitised image, and your hand on a green background in the bottom bit. You are dealt five cards, which are then turned over. These appear quickly and you can decide whether you've got a good enough hand (providing you know about such stuff) to go into the game proper. If you 'drop', then your opponent might 'drop' or she might bet, and you then have to decide whether you'll throw in the wager and then 'call' (i.e. say you're content and will not bet more) or 'raise'. You control the game by using the left and right cursor keys to move to a particular option, or a particular multiple of $5 when betting.

Sometimes you get a good hand, with two pairs or a flush; other times you get a hotchpotch of cards. You do get the opportunity to discard up to three cards before turning them over so you can leave all the thinking to lady luck if you wish. Whether the AI of the computer can take in such decisions or whether it's all based on pure luck I'm not too sure, but unfortunately, no matter what lousy cards you get, it never seems to play a good game. If you bet the maximum $25 and then keep raising by $25, it invariably buckles and Donna or Sam will be naked in less time than it takes to say tits out knickers down.

With this in mind, it's fairly impossible to rate this game on a playability scale. The code for the poker-playing is all written in BASIC (and freely listable) and the only difference in choosing to play against Donna or Sam is in the pictures that are displayed. Neither girl has her own playing style; the only thing that changes is the filename prefix for each picture. Oh yes, and originally this title came on both cassette and disc. Goodness knows what it would be like trying to play it from tape with a striptease of five pictures all loaded individually, especially when you consider the girls re-clothe themselves if they win a hand!

Once you've played right through to the final picture (Is it just me or does Donna look tragically deformed when stripped naked anyway?), then your opponent will somehow find $200 out of nowhere to continue playing which means theoretically the 'game' can continue forever.

To try and put this into perspective, if the digitised pictures were not included, this would be an under average type-in. It really is poor. It trades purely on the very limited titilation offered by the front cover. As far as I know, although it calls itself Strip Poker *2* Plus, there's no prequel. And what the 'PLUS' is meant to signify, only Anco know. The only real positive I can find in its favour is that you do sort of want to play it against each girl, at least once right through to the end, just to see all the pictures and be assured that you're not missing anything. Also, I suppose some credit has to be given to Anco for at least attempting an 'adult' game on the Elk.

Overall though, Strip Poker 2 Plus on the BBC/Electron is a real stinker, neither providing a challenge for poker players nor an outlet for the pre-internet pubescent schoolboy. Load it up, play it through, and make sure you never touch it again.

Load it up, play it through, and make sure you never touch it again.