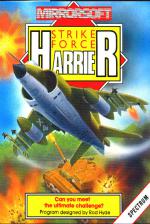 When Concorde pilot Captain John Hutchinson reviewed Strike Force Harrier, on the Commodore 64 he had a word with a chum in the RAF and "took one up" to test the simulation for authenticity.

One wonders what this bells and whistles and Amiga version would tempt him to do - perhaps a head-to-head with a MiG - who knows? One thing is clear though this is about as near as mere mortals like you and I are going to get to going head against a MiG in the fabulous jump jet.

The number of controls and information panels on offer are staggering - offering a truly sophisticated and absorbing simulation - though not a "pure" one as there are a few fictitious extra facilities thrown in for good measure.

Once you have mastered the basics of flight you can accept a mission. The objective here is to destroy the enemy HQ - 125 miles NNE of your position as shown on your ground map.

Before letting the enemy HQ taste your missiles you have to eliminate the ground tanks that are threatening your ground installations.

Once you are in the skies you can rely on the plane's highly computerised controls to get you through your mission. Your trustiest ally is your FOFTRAC - a fictitious instrument that real pilots would love to have on board. It stands for Friend Or Foe Tracking Radar. It appears just below the cockpit and shows you a combined map and updating target display of your area of operation.

To supplement FOFTRAC, you also have the AAR - which stands for Air Attack Radar and shows you in detail what is also occupying your airspace.

Excellent Amiga sound effects help you here like when the plane stalls - there is a change of noise and the nose drops.

The 'Vector thrust' which is what enables the jet to perform its characteristic vertical lift off is produced by turning the engine nozzles through 90 degrees, forcing it into the air. The simulation simplifies things slightly - in as much as you have only three angles - horizontal, 45 degree and vertical.

I know of at least four new flight sim-type games currently under development for the Amiga. Mirrorsoft's Strike Force Harrier will be the one that wins the race to the software shelves - it may well prove to be the most entertaining as well with its neat mix of pure sim and arcade gameplay.

There are at least four new flight sim-type games currently under development for the Amiga. But Strike Force Harrier may well prove to be the most entertaining as well with its neat mix of pure sim and arcade gameplay.