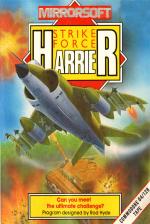 Over the last few months the crisis in the Middle East has worsened. Both Russia and America have played a part in supplying arms to opposing sides. Now events have escalated into a direct East-West confrontation with the Warsaw pact massing along the East German border. With an invasion imminent, an emergency session is called in Geneva and both sides sign a nuclear amnesty proclaiming that only conventional forces are to be used. With this signed both countries prepare for war...

In this flight simulator, you take the role of a VTOL Harrier on a desperate mission a few weeks after the declaration of war. The war is not going well and the Warsaw pact have invaded, and now successfully occupy all of Germany. The Eastern forces HQ lies 500 miles behind enemy lines and from this the actions of the Warsaw pact are dictated. If this base were to be destroyed, it would cause complete confusion in the Eastern ranks, allowing NATO forces to attack and beat back the invasion.

Naturally, a large force couldn't be used to knock out the enemy HQ as it would be easily detected. So, it was decided that the only way the job could be done was to send in a single Harrier Jump Jet, equipped with suitable weaponry, to destroy the base. The manoeuvrability of the aircraft means that it can fly under the radar floor and completely avoid detection. You, being the best pilot available, are asked to undertake the mission - the future of the Free West is in your hands...

The key to success lies in your ability to control the Harrier and its large amount of weaponry and commodities. The Harrier has been specially fitted with wartime equipment, including a FOFTRAC (Friend Or Foe TRACking radar which tells you whether your target is a friend or foe), AAR (used to determine an enemy's position), and MFD, which shows flight information. Naturally, all these controls must be mastered and used effectively if your mission is to be successful.

The flight to the enemy HQ is a very hazardous one and the route is littered with enemy tanks, anti-aircraft batteries, and interceptor aircraft armed with air-to-air missiles. To avoid radar detection, you must fly below 500 feet, although this leaves you vulnerable to anti-aircraft fire. Flying above this height means that you can be detected and aircraft will be sent to intercept and destroy you.

The distance between you and the enemy base is divided into sectors. When you enter a new sector, it's advisable to fly around and photograph the area - if you do this it means that FOFTRAC can be used. There are four landing sites behind enemy lines, run by the German resistance, and if you are to complete your mission you must reach at least one of these so you can refuel and re-arm your craft.

There is plenty of on-screen information, giving you a constant update of your position as well as your speed, height, direction, the position of any enemy craft or installations, thrust, fuel, and so on. When you first encounter the program, you can play it as a shoot-'em-up, but once you begin to learn how to fly and land the craft, you can tackle the mission proper.

This is a very impressive flight simulator program which gives anyone who's prepared to persevere, the thrills and spills of becoming a wartime pilot. The graphics and the speed at which everything moves is quite impressive, and the whole simulator feels good. The only problem is that, like most simulators, it takes a lot of time to master the large amount of controls and actually take off and land without crashing. If you're prepared to stick at the program, I suppose it might have some rewards, but if you want more instant action then try Ace.

This game is chiefly remarkable for simulating vectored thrust, that's because it isn't remarkable for anything else. It just doesn't feel like flying. Just as you were nearly fooled, the screen blanks out and refuses to reappear until you let go of the stick.

I'm not impressed. If you want a good airborne shoot-'em-up, try Ace, and if you want a simulator, try F-15 Strike Eagle. This game manages to fall nicely between the two stools.

Recreating the feel of flying a high speed VTOL fighter can't be easy within the limitations of a home computer, so it's hardly surprising that Strike Force Harrier doesn't look or feel very realistic. There is a lot to keep you busy, but I never felt stimulated enough to persevere. I reckon it's fair to say that Strike Force Harrier will appeal to anyone who likes a challenging flight simulator. I don't like it, but then I'm not too keen on this type of game.

Graphics 63%
Functional, but they don't really give a true flying effect.

Hookability 67%
The complexity of the controls proves initially overwhelming.

Lastability 70%
Plenty to do - if you're prepared to persevere.

Value For Money 64%
Not an impulse buy - there are plenty of other flight simulators in this price bracket.

Overall 68%
Not a brilliant flight simulator, but one of the more exciting on the market.

Not a brilliant flight simulator, but one of the more exciting on the market.