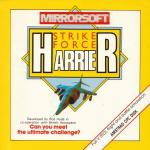 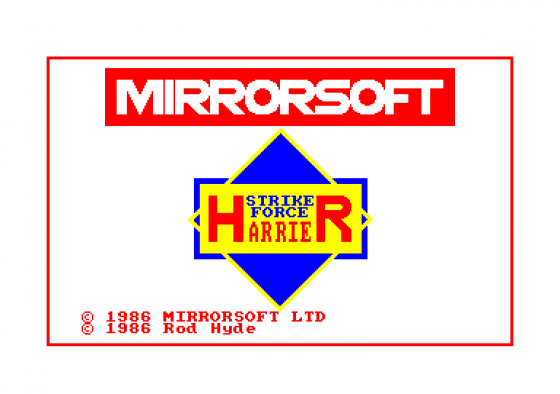 Flight simulators have come a long way since the days of "take off. fly about, land." They are developing into proper combat simulators where you not only have to learn to fly but need to put those skills to use in both ground and aerial combat. Skyfox went along these lines but concentrated on the shoot-'em-up aspects.

This simulation requires you to develop flying skills first, having all the dangers of other simulators in crashing, stalling, fuel and landing, but with the highly developed combat scenario to deal with as well. Although this might sound like too much to deal with at once the controls and action do in fact slot into place quite nicely when approached step by step.

The flying controls can be operated by joystick or keyboard with additional functions being run off the keys. These other controls are merely undercarriage, power, flaps, brakes and thrust direction but they affect a number of indicators on the instrument panel. This is composed of a lower half of the screen display and a HUD (heads up display) overlaid on the view through the cockpit. Indicators show the fuel level, speed, vertical speed, height, compass, roll, pitch, thrust and radar but these only need to be referred to at intervals and you'll soon get used to what each one does. 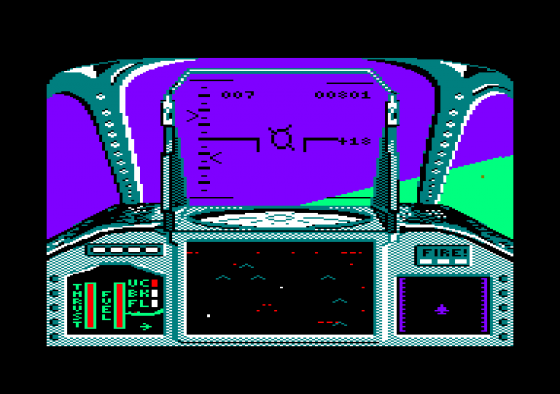 Once the flying is mastered you can put it to good use in taking on tanks and planes before thinking about your overall objective. Below 10,000 feet the view is of trees and hills, amongst which appear tanks. These can be dispatched with bombs or cannon fire. They won't shoot back but the ground defences include SAM missiles that home in and anti-aircraft artillery. Above the cloud layer at 10,000ft are the enemy MIGs - these can be shot down with cannon or heat-seeking missiles but may reply with their own missiles.

All the armaments are limited in number so that regular stops for refuelling and re-arming are needed. These can be made at ground sites that may have to be prepared as you go along. In this step by step manner you can advance towards the enemy HQ, destroying tanks and planes before landing to make another forward base. If the Harrier does come under missile attack it can either try to dodge them, use chaff or infra red flares. Taking too much damage or crashing will end the game, leaving you to start the mission all over again.

A very impressive combination of simulator and fighting. Lots of controls, but they're well worth mastering. Graphics are pretty and smooth, although the sound is a trifle on the weak side. And it's good fun blasting other planes out of the air.

This one has real long-term interest. The flying skills alone have enough depth for one game, without even trying the central task - all that VIFFing will take time to master. Any complaints? Well, the central task itself has the familiar Combat Lynx drawback - it's such an unrealistically large job for one plane. I mean, there's no need to simulate the RAF that accurately!

Bit muddy in mono. I'm afraid bursting through the clouds isn't half as spectacular.

N. May take some time to get proficient. 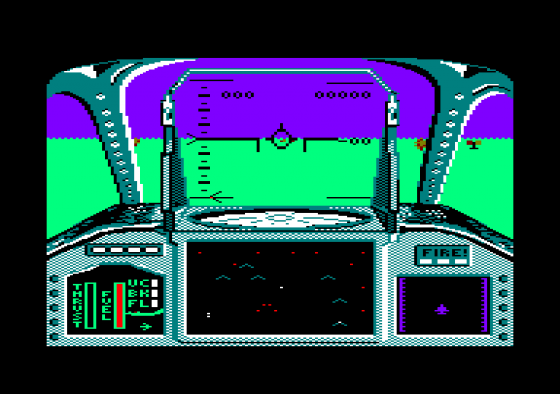 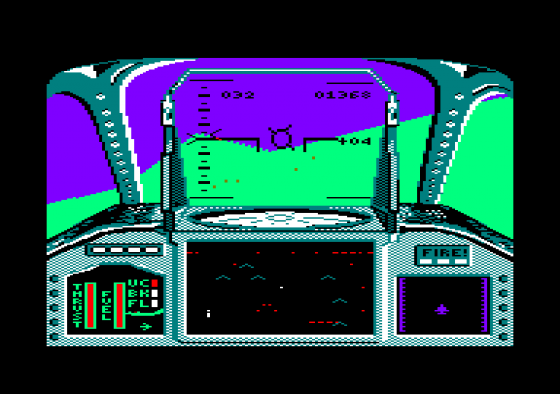