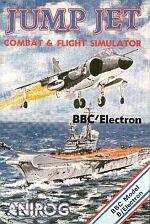 Two new simulation games have the world's best proven combat aircraft at their centres - the Harrier Jump Jet. Both will run on the BBC Micro and Electron.

Mirrorsoft's Strike Force Harrier puts you in the cockpit of the jump jet with an arsenal of cannons, bombs and sidewinder missiles. You have the choice of practice level or combat level as well as with three skill levels.

The screen display is neat - speed, height, pitch and compass headings are displayed on the cockpit hub. Below this is a small multi-function display; the FORTRAC map/radar; a message screen and the head up display.

Playing the game is straightforward - just bomb the enemy HQ. Control is via the keyboard although the joystick option allows you to 'fly' in a more conventional manner. Flying the aircraft is reasonably easy to master; the FORTRAC shows you where you are, where you're going and what's below you.

Once you pass the 10,000ft mark you pass through the cloud into clear blue skies with amusing wisps of cirrus here and there.

Combat is interesting, and the manual - albeit a bit short - details the various encounter tactics available to you. It fails to tell you actually how to fire anything though!! It was only after some real head-scratching that I found the word 'trigger' on the space bar on the map of the keyboard!

Some nice touches allow the pilot (you) to black out (the screen goes black!) or suffer from blood rushing to the head (the screen goes red!) - so watch how steep you climb or how fast you descend!

While the cockpit display is quite good, the out-of-the-window graphics leave a little bit to be desired, with no real detail at all. I have yet to see a missile at any time other than on the air attack radar. Apart from these inadequacies the game is both hard and interesting to play and, all in all, worth the asking price.

The second offering comes from Anirog, it's called Jump Jet and the home base is an aircraft carrier.

The cockpit display is not as realistic as Strike Force Harrier's but it's passable. At the start you get a bird's eye vew of the jet on the carrier launch pad. As you reach 50ft this changes to a dual display showing the side and rear views of the carrier with the jet above it. A little higher and you have an out of the cockpit display which is slightly better than the previous game's.

The only real problem I had in getting to grips with this version were the instructions. It's only after reading five pages I found it is a joystick-only game, a page before the loading instructions! Flying and manoeuvring are difficult and you are penalised for each mistake you make. You're allowed nine errors after which it's back to the launch pad.

To obtain one of the five ranks you must successfully complete the selected mission. Each rank comes with more adverse weather conditions - which makes controlling the jet difficult - plus extra enemy aircraft to destroy.

Beware, this is a joystick-only game... Flying and manoeuvring are difficult and you are penalised for each mistake you make.