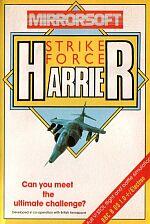 Ad Astra Per Ardua. A special mission requires an aircraft and a pilot to match.

BBC+ owners plagued with software compatibility problems with games like the popular Beach Head and Match Day will be delighted to learn that this program works perfectly. As well as the B/B+ version there is also one for the Electron which I am advised is identical except that there is no joystick version.

As you may have guessed from the title, this is, in part, a flight simulator program which, on this occasion, is based upon the famous Harrier Jump Jet. Before you start to turn over the page thinking "not another flight simulation program" let me tell you that Strike Force Harrier is something special, possessing interesting variations on the usual theme. You are given all the ingredients required for a great game: good colourful graphics, different skill levels, a mission to complete, good sound effects and most importantly a high level of addictiveness. Strike Force Harrier is accurately summed up by Mirrorsoft's own words in the accompanying manual: "At its simplest level, the program is an exciting arcade-style shoot-'em-up with ground and air targets. At its most complex, however Strike Force Harrier demands informed and accurate handling of your aircraft and an appreciation of modern ground attack and air combat techniques."

The program was designed in co-operation with British Aerospace and therefore the Harrier's handling characteristics should be reasonably accurate. I found control of the Harrier somewhat easier than that of the Spitfire in Acornsoft's classic Aviator; there is a combat option but with Strike Force Harrier it is not aliens you encounter but tranks, SAM sites, land to air missiles and enemy MIG fighters.

Whilst I received much pleasure from Aviator, I must admit that after only two days I am even more impressed with Strike Force Harrier. It has two important features that Aviator did not, namely playability (control in Aviator tended to be a little too difficult) and an interesting realistic and imaginative scenario.

Upon loading Strike Force Harrier, I was greeted with a Mode 5 cockpit display with various instruments in the lower half of the screen and a pilots-eye view in the top half which revealed that the Harrier was stationary on the a runway.

Mode 5 graphics instead of Mode 2 have been used, no doubt due to the memory demands of the program. Despite only four colours being allowed on the screen at any one time in this Mode, I was never conscious of this limitation, as clever and considered use has been made of the colours available. Thankfully, and unlike in Aviator, the terrain and sky are the correct colours which greatly adds to the feeling of realism.

The instruments in the Harrier's cockpit provide the pilot with details of air speed, height, pitch and direction of flight. There is a message screen which enables the Harrier's computer to flash warnings to you, the most common being "Too Fast", "Too Slow" and "High Ground" which is invariably followed by "Collision predicted" if your evasive action is not fast enough. This message screen also informs you when you are over a friendly landing site, being scanned by enemy radar or that a missile is approaching.

One very interesting instrument is the "FOFTRAC" (Friend Or Foe Tracking Radar) which is not currently found in Harriers but as the manual suggests, is a future possibility. The FOFTRAC provides constant updates of the operational zone that the Harrier is in at the time. The FOFTRAC is extremely useful as it clearly displays the position of mountain ranges, SAM sites, and landing sites, as well as enemy tank and MIG fighter movements.

As most of you will be aware, the Harrier is famous for its vertical take-off capability and consequently controls for forward, 45 degree and vertical thrust are provided. For attack and defence your Harrier comes supplied with Sidewinder missiles, bombs, cannon, chaff and flares.

You can have a great time with Strike Force Harrier, even in the practice mode/pilot level which is similar to the two harder levels except that the enemy cannot fight back and you don't have to worry about the effects of G force, higher fuel consumption and the need for greater accuracy with your cannon. If you are considering playing the whole game under the protection of this mode and level you are in for a nasty shock because after 15 minutes has elapsed, combat mode automatically comes into operation and you are then vulnerable to attack.

I recommend you to carefully read the well-thought out and easy to follow manual as this provides valuable hints and detailed techniques for dealing with the different hazards you will unquestionably encounter before too long.

Your mission is to destroy the enemy's HQ which is some 500 miles NNE of your start position and a Grid Map is provided with the manual to assist you in plotting your progress.

Having raised the Harrier into the air by using either conventional, short or vertical take-off methods your first task is to secure your four "home" landing sites by destroying advancing enemy tanks in the vicinity. If all your landing sites are destroyed you won't be able to refuel, rearm or make necessary repairs, all of which are vital if your mission is to succeed.

Having survived several scares and attacks you will find that fuel is running low and a vertical landing on rough unprepared ground will be necessary. When this has been accomplished a "Homer" signal is sent out, which calls up friendly ground forces from one of your landing sites to your current location. Upon their arrival a new site is prepared on smooth ground as close to you as possible. Once you have reached the newly prepared site your Harrier can be rearmed and refuelled ready for its next stage of the mission.

If you fly much above 10,000 feet you will enter the cloud base and your out-of-cockpit view will resemble a thick fog until you have climbed above the clouds where blue skies will be once again encountered. It is at this height, around 12,000 feet, that you are most likely to be engaged by enemy MIG fighters.

The whole mission will take about two to three hours and I would have liked to have seen a "Save Position" option. Mirrorsoft informed me that the omission was deliberate, as they wanted players to get the true feeling of a real time mission which in real life would, require you to concentrate non-stop for many hours. I agree with this point of view but, a "Freeze" option has been provided which has a similar effect as a save option, the only real difference being that if you wish to continue your mission a few hours later, or the next day, then you have to leave your micro switched on all the time.

To sum up, Strike Force Harrier, is possibly the best game I have come across since Elite and has to be a must for most people's collections. Its Mode 5 graphics are excellent and the vector graphic tanks and SAM sites look particularly impressive. Strike Force Harrier will provide you with many months of enjoyment and more so, as you gain further experience and expertise. The only slight blemish in the game that I have found is that if you attack ground targets and put the Harrier into a steep turn or fast spin at the same time, the land and sky, as you would expect, appear to revolve in front of you, but the ground targets and hills sometimes don't keep pace with the ground, thus causing them to float momentarily in space. This phenomenon only appears to occur during the circumstances just described, and it shouldn't detract from anybody's overall enjoyment of the game.

One small word of warning, I have found that with the disc version only, Strike Force Harrier fails to work properly when Computer Concepts' Disc Doctor is resident inside the micro. I have spoken to Mirrorsoft and they are looking into this. The cassette version however worked perfectly on my B+ despite Disc Doctor's presence.

So far I have only managed to succeed in getting a quarter of the way to the enemy HQ. Never mind, on with another mission... "Now where have those enemy MIGs got to... Aaghhhhhh!"

The best game I have come across since Elite and has to be a must for most people's collections.