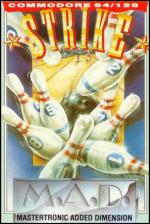 Following in the path of Access' 10th Frame and Advance's Indoor Sports package comes Strike, another binary bowling simulation. Either one or two players can participate, the computer taking the place of an absent second player.

The main screen gives an overhead view of the lane, with your bowler standing at the left, next to the ball-return. He is moved right or left to the required position on the lane - where pushing forward on the joystick causes him to begin his run-up. Pressing and holding down the fire button starts the bowlers' swing, and releasing the button also releases the ball, which then proceeds down the lane.

Wrongly timed shots result in the ball merely dropping to the floor (or the bowler's foot), and a foot-fault is called if the bowler's run-up encroaches onto the lane - in both cases a zero score is awarded.

Contact between the ball and the pins is shown in real time and the consequent pin-ball is displayed at the top left, to be reset by the machine seconds later. The corresponding score is noted on your score-sheet at the bottom of the screen, ready for your next bowl.

This half-baked attempt at a bowling program is really annoying. Play is frustratingly slow, with the sprite plodding back and forth across the alley as if its knees were glued together.

Releasing the ball is a very fiddling exercise, and I felt that I didn't really have control over the action - even when I scored several strikes. If you're hankering for a bowling simulation save up for 10th Frame, unlike Strike it's worth every penny.

As far as I can make out, Strike seems to be based on the game of ten-pin bowling. This is strange, as it bears little relation to the activity of the same name which I participate in every week.

The action of bowler and ball is unrealistic and the pin-fall is a joke: hitting the head-pin either obtains a strike... or leaves three of the back pins standing! It's simplistic, boring and frustratingly limited. To be quite honest, any further criticism seems superfluous.

Just pretend this game was never written and save yourself three quid - or go and play the real thing. It's a lot more fun.

Why Mastertronic have released a product as sub-standard as this after Epyx's great 10th Frame is quite beyond me. A budget price should not be an excuse for a bad game. The single screen action destroys the atmosphere and suspense of where the ball may end up in its progression to the pins.

The player has no control over the ball's curve and power, making Strike! very boring - and waiting for the computer in a one-player game only prolongs the agony. Strike contains no realism and not even a pinch of addictiveness. You'd do well to avoid it.

Hookability 20%
The fiddly control method and simplified gameplay do little to stir the imagination.

Lastability 5%
The already limited appeal is completely lost when one ball has finally been successfully launched.

Value For Money 13%
A complete waste of money.