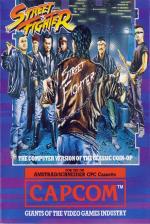 From the programmers of Rolling Thunder, 720 and Indiana Jones comes a conversion of the Capcom coin-op game of martial arts. Travel the world in an attempt to become the worlds greatest streetfighter.

The screen shows one of five different backdrops and in the foreground are two figures. Above the playing area is a bar that shows how much energy each fighter has and two indicators inform you of how many rounds each fighter has won. Combat takes place in five different countries and there are two opponents per country. The countries are Japan, USA, UK, China and Thailand. To go on to the next opponent, you must win two of the three rounds of combat. As with most other combat games, you have a variety of different moves that can be used to defeat your opponents.

To win a fight, you have to reduce your opponents energy to zero and then bonus points are awarded according to how much time is left and how much energy you have remaining After beating two opponents you go to a bonus stage where you have to smash a pile of tiles. Play then moves to another country and the opponents get tougher.

Graphics are lacking in colour, but the animation of the fighters is reasonable. The backgrounds scroll left, or right if you move near to the edge of the screen. Sound is limited to simple fighting effects.

Martial arts programs seem to have been around forever and they have got stuck in a rut. All you get now is some different graphics and perhaps some tougher opponents. There's nothing wrong with this if you're in the mood for some mindless beat-'em-up action.

There really is nothing new here at all, just more beat-em-up action. It offers reasonably good increasing difficulty but otherwise it isn't anything we haven't seen a dozen times before.

Sonics 23%
N. Nice effects, but there aren't many.

Staying Power 43%
P. Ten different opponents of increasing difficulty
N. Once you've beaten them all, there's nothing left to do.

Overall 51%
You'd think people had had their fill of this kind of stuff.

Ten different opponents of increasing difficulty. But, once you've beaten them all, there's nothing left to do.