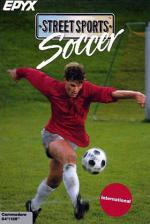 If you wanna be a real soccer star, you've got to start on the streets, Pele did... Maradona did... Johann Cruyff did... Paul Glancey didn't - which is why Pele is a megastar and Paul Glancey isn't. Funny old game, innit?

Right, now we've established you're going to be famous, let's do it properly, shall we? First: the pitch - there's the soft and slippery turf of the park (watch out for those little canine calling cards) or just the plain old, ordinary backstreet.

Second: the team. You can pick three players from a selection of rough and ready streetwise kids. Spin a coin to find out whether you or your opponent (human or computer) go first and the most Epyx (ho ho) match on the block is ready to begin.

Pressing the joystick button toggles between members of the team. In addition to basic passing, receiving, shooting and kicking, you can play a variety of fancy 'set shots' and block an offensive player.

Fouls result in a penalty shot and offsides (an offensive player without the ball gets behind a defensive player) mean automatic change of possession.

Matches are played over a set time limit or until one team achieves a preset winning score.

These past couple of months have seen their fair share of footy simulations. They seem to be popping up everywhere you look!

I suppose Epyx's release is more to go with their Street Sports series, not ust following the rush of World Cup-influenced games.

This isn't a bad game at all as a matter of fact, but I must say that after Baseball I did expect something more than a watered down International Soccer-type game.

The sprites are a bit on the small side - and a bit chunky come to think of it. The backdrops are a fair enough representation of a street and a park, but wouldn't a couple of coats on the floor be better than the apparently well made goals that are there instead?

Playability-wise, the game is quite interesting, capturing a good deal of the atmosphere of the kickabout games I used to play, but the variety is definitely below the usual Epyx standard.

Back where I come from in't Lancashire wilds, backstreet football could lead to some pretty nasty arguments - but it wasn't exactly played according to the rules. Much t'same could be said (though not necessarily in that accent) about Street Sports Soccer: it's good fun to play (especially with a friend - well, with Maff, anyway) and even better to argue over, but it's not really a proper sports sim - there's just not a big enough variety of tactical moves for that.

But then, is it intended to be? As usual, Epyx' classy presentation is excellent, right down to the spinning coin that decides who starts the match.

If you're not bothered about an incredibly faithful soccer sim, get out your boots and give this one a whirl: I think it's fab.

This time I'm going to beat that fatso Gordo into the ground, if it's the last thing I do!

Meanwhile - back to the comment. First off - this is not a very serious football sim and you don't need to memorise a whole range of complicated moves to play.

And that's exactly why I think it's great; if you can't go down to the park with a group of friends, the next best thing is staying in with your computer to bash the ball about.

You don't need any special knowledge or skills - just get in there and beat the hell out of them. Almost like the real thing... But then, being a girly, what would I know about that?

Graphics 75%
Bright and bold but the players still suffer a bit from 'the chunks'.

Hookability 78%
You've just got to beat your mates.

Overall 75%
Just as much fun as kicking a ball about in your back garden - and you can't break your neighbour's windows!

Just as much fun as kicking a ball about in your back garden - and you can't break your neighbour's windows!