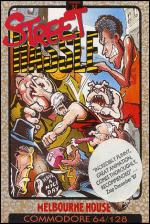 If there's a game in the C64's vast library that refuses to take itself seriously, it's Street Hassle.

Developed by Beam Software (Way of the Exploding Fist), the game thumbs its nose at political correctness, and tweaks its ears, before putting it down with a skull-crushing headbutt.

Resplendent in his golden battle shorts and knee-high boots, our hero takes to the streets to dispense urban justice to the ne'er-do-wells, punks and general undesirables he encounters on the sidewalk. The game is an unashamed cornucopia of cartoon violence, and it's all the better for it!

The cast of characters you'll face on your adventures are surreal, to say the least, including stick-wielding geriatrics, bulldogs, and even handbag-wielding old ladies. Everything and everyone becomes a target in your war on suburban life, and regular scuffles with the game's escaped gorillas are just downright bizarre!

The oversized cartoon sprites give the game a genuinely unique look, which sets it apart from most other C64 releases.

The oversized cartoon sprites give the game a genuinely unique look, which sets it apart from most other C64 releases.