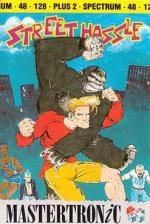 Straightforward punch-'n'-crunch game which looks rather happier in the cheapie rack than it did when released at full price a couple of years back (by Melbourne House). Wearing golden battle shorts and armed with, well, nothing very much, you decide to clean up the streets - which look pretty clean to me already, but never mind (perhaps the street cleaners did their stuff this morning). At least, "cleaning up the streets" is your excuse, as all you seem to do in Stage One is beat up little old ladies and Andy Warhol lookalikes who throw bricks at you.

Perhaps it's the presence of a huge muscle-bound lunk like you that so offends them. So you punch, and punch some more, and in the classic Renegade style people fall over and vanish in thin air. The sprites are rather larger here than in that splendid old beat-'em-up, but overall the game hasn't the same subtlety, or indeed long term appeal. But for three quidlets, it's not a bad game of its type. Fans of mindless violence will lap it up.

The sprites are rather larger here than in that splendid old beat-'em-up Renegade, but overall the game hasn't the same subtlety, or indeed long term appeal.