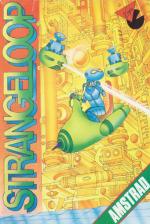 Strange name for a strange but immensely enjoyable game. It's set aboard a factory ship out in space and has the sort of graphic excellence we expect from Virgin, as well as some really wicked puzzling that could keep you playing for weeks. Not only that, but it's got 250 rooms full of dangers, objects, humour and colour.

The factory itself has been running out of control for many years and the robot population have taken over, making the whole place a deathtrap for humans. Your task is to get to the control centre of the ship and shut it down. This is no simple matter of just finding the room though - a whole series of puzzles have to be solved and obstacles overcome before the way becomes clear.

You start somewhere near the centre of the factory which is made up of a block of rooms 25 high and 10 wide. The space-suited hero begins on foot but not far away is a jet cycle which will provide a much faster and convenient form of transport. Most of the rooms are much like the starting place, filled with hi-tech machinery. Moving bucket belts, conveyor belts, floors and machines may partition off rooms while connections between them areas take the form of tubes and holes through which the man can pass. This passage results in a momentarily blank screen which may prove annoying.

Most locations are filled with 'swarf' which are little pieces of junk that will rip holes in the spacesuit. These decrease the oxygen supply and unless patched eventually lose you one of your eight lives. The swarf can be shot with the gun you carry but reappears if you re-enter a room. Mega-swarf is a much tougher proposition and appears as large bouncing balls that are indestructible and fatal on contact. All this can make rooms appear colourful and active, if not a little messy.

There are other dangers that may result in a messy ending for our hero he may get squished by crushers which have a great sound effect as they pound up and down; de-energised by one of the many robots or even sucked out of a depressurized part of the ship. The basic rule is always: if it moves, avoid it.

The non-moving objects are what your man is after and these take two forms. One group provides general supplies while the other is made up of the objects used in problem solving. The supplies replenish oxygen, fuel, charges (for the gun) and patches for the suit. These work instantaneously when they are picked up by passing through them. The other objects are picked up in the same way and appear in a box on the screen - your 'pocket'.

When used in the right circumstances these objects will be exchanged for another object, cause a door to open or some other similar effect. What and where they are used is for you to work out but it does help to be logical. Some of the locations and object uses are quite odd - evidence of the "Gang of Five's" (Virgin's programmers) humour.

The graphics create a good atmosphere and what sound effects there are add to the action. There's a handy save game feature since this game will take a long while to solve. One other nice touch is that when you die, instead of appearing straightaway where you died you can position the man anywhere legal within the room. While, you're doing this the game is paused and no harm can come to you.

Following on from their classic Sorcery, this is another tremendous game giving excellent graphic action and mindbending puzzles in just the right mix.

This is a massive game and a worthy follow-up to Sorcery. Movement is pretty smooth, but your path to solving the game will be strewn with disaster. It's far from easy - the adventure element s particularly strong and will require powerful brainwork. With such a huge number of locations the game is bound to give long-term satisfaction.

P. 250 screens.
P. Great graphics and hazards in all 250 rooms.
P. Tough puzzles to solve.
P. Good mix of arcade and adventure action.
P. Guaranteed to keep yon guessing for a long while.

After the massive success of Sorcery it was always going to be difficult for Virgin to produce a worthy follow-up. Sorcery+ hardly counted since it merely expanded on an established theme but Strangeloop is a real departure.

It combines the excellent graphic quality of Sorcery with a much tougher mental task that should give it even more lasting challenge. It may not have as much immediate appeal as Sorcery since getting into the puzzles will take a while.

Strangeloop is also, of course, a lot bigger than Sorcery and much more hi-tech in its looks, features and gameplay. With such improvements there's no doubt about the success Strangeloop should achieve and it makes the arrival of Shogun an even more eagerly awaited prospect.

Combines the excellent graphic quality of Sorcery with a much tougher mental task that should give it even more lasting challenge.