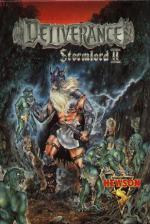 We all remember Stormlord don't we? it was generally well received and so now, unleased on a sleepy market, is Deliverance - Stormlord II.

Our hero Stormlord, (for it is he), has gone to Hell. This doesn't mean that his friends don't like him because of his anti social tendencies (like killing anything he doesn't like the look of) but he's there on a mission to rescue his friends the fairies who have been captured and are held by the followers of the utterly wicked and seriously anti social, Black Queen. Stormlord must make his way through the underground caves, creep around the crypts, muddle in mines and finally frolic in the forest before reaching heaven where he must face the ultimate bouncer of the biggest club in heaven. Yep! Even St Peter gets into this game and why not?

Stormlord's way is hampered by various evil buggers including cupids, bogey coloured Trolls (Oi! That's my leg!), zombies and vampires all of whom are evil and most of whom smell as if they're well past their sell by date.

Well, rescuing fairies sounds like a job for someone with a light touch and clean fingernails but Stormlord uses sheer brute force but they are naked girlies after all. There are several weapons that are lying around that he can collect and, using the keyboard to choose one of up to five, use to their best effect. The real crux of the game is that Stormlord can 'climb' the screen using up to three jumps in succession but timing is of the essence 'cos with the little bubbles of doom that float about, death comes very easily; one knock and you're knackered. And that's true for all unmentionable unpleasantnesses.

All sounds pretty death heavy eh? Well it's very difficult to make any steady progress when you first begin and even with 9 (count 'em!) lives, it's tricky. This probably has a lot to do with Rafaelle Cecco who's one half of the programming team. He's sounds like he could be Spanish you see and the Spanish market actually seems to like games that are damned nearly impossible to complete.

So, that aside, what's it like Garfy? Well, it certainly pretty and the graphics are pretty neat. The death sequence when ol' Stormy looses a life is horrific(ally) funny but the best part must be the unfurnished fairies. I mean you can see everything it's probably a good job that they're somewhere warm.

Not one for novices. But will stretch even the best gamers.

Not one for novices. But will stretch even the best gamers.