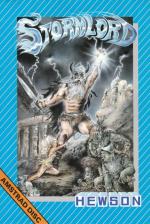 Have you ever wondered what happened to all those fairies who used to live at the bottom of the garden when you were a kid, but who haven't shown their wings for ages? Did the tooth fairy join BUPA? Has the Fairy Godmother gone to spend her days at a rest, home? Did they all hang up their wands as soon as we stopped believing in them to join the dole queue behind Father Christmas? No, they all packed their bags and fluttered off to Hewson to take a starring role in Stormlord.

The story behind Stormlord is as simple as the gameplay is difficult. These poor fairy folk have been kidnapped by some fantasyland mobster Queen and Stormlord's job is to rescue them as quickly as possible. All that stands between him and completion of this mission are a few million tricks, traps and beasties more suited to Elm Street than fairyland.

The first thing Stormy must do is to play find the fairy, which isn't easy. All the little ladies (who insist on remaining naked even when trapped by killer bees!) have been stashed away in boltholes throughout each level, either behind locked doors or guarded by some creature. To get to them, Stormlord has to fight his way along a horizontally scrolling landscape throwing magical thunder bolts and using special springboards to catapult him between sections. There you are innocently standing on this plank when Aaaaarrrgggghhhh!! You're flying through the air with the greatest of ease, and not a trapeze in sight you, daring young man.

The game starts with the fairies friend trapped between an infeasibly vast vase and a positively huge toadstool. After leaping upon the fungi, you make your way along until the path is blocked by a spore spitting shrub (the first of those tell-tale signs you're playing a Cecco game). Your little 'Stormlord' has to time his passage to the split second, or he'll be pushing up the daisies - after being splattered by one their larger cousins.

Negotiation of an obstacle usually allows 'Stormy' to collect a magic item to help him on his search. Sometimes it's a key to open a cell door, other times it's an umbrella to keep off acid rain that kills on contact. He can only keep one item at any time, so it's worth taking a few minutes and losing a few lives to got to know which one to have in your pocket at what point. It's no use carrying a honey pot when you need a brolly, 'cause it just wont work matey.

To rescue each fairy requires not only the right icons and avoiding the traps but also, in typical Cybernoid fashion, a lot of monster blasting. Eggs fall from the sky and must be destroyed before they hatch and release a 'green jaw' creature with a real taste for lord's bones. While in others R-Type refugees don't take kindly to, well, anything. Worst of all though is the endless stream of pink fluffy worms who leap on you lemming-style.

Stormlord gaming is made even more difficult by the tightness of the time limit. Should you survive to the end however, your reward is a breather, by way of a sub game. To win an extra life 'Stormy' must blow kisses at the fairies who, when hit, fall in love with their saviour immediately. Then the fairies burst into tears, ten of which have to be caught to stave off oblivion one more time on the next level.

The first thing that strikes you about the whole game is its truly stunning appearance. Stormlord's colours are bright and vividly used to evoke a land of mystery and magic, while the sprite designs merge demonic and comic to create a unique character for the game. This sterling work by Nick Jones is accompanied by a brilliant soundtrack courtesy of Dave Rogers (whose work we featured in AA 44). For a change these 'peripheral' details have had as much care lavished on them as the game.

Quality is apparent in every aspect of Stormlord. You won't have much opportunity to appreciate this while playing though. Not only do your reactions get a real workout, but the puzzles and greater depth that require the grey matter to be in gear as well. This is no beginners' game, but a challenge for veterans of many Cybernoid adventures, as Cecco has developed a test only the toughest, most committed will survive. Stormlord demands 100% concentration, 200% of the time, and that's during the easy bits!

Stormlord's appeal in no way comes from the gameplay. There are dozens of similar platform games around, but none of them match Stormlord in terms of depth, character and complexity. This is not an instant game, but a classic challenge.

Graphics 96%
P. The best looking game so far this year!
P. A perfect blend of humour and horror.

Staying Power 85%
P. Levels are so tough continued playing is a must, just to complete each level.
N. Maybe levels are too tough!

Looks, sounds and is brilliant... Levels are so tough continued playing is a must, just to complete each level.