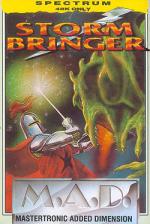 Following in the footsteps of its fore-runners, Finders Keepers, Spellbound and Knight Tyme, this final part presents Magic Knight (you) with a decidedly ticklish situation.

The Off-White Knight, a mysterious no-gooder from distant lands, is hell-bent on taking over any piece of real-estate that isn't staunchly defended. In the time when our hero was off being thoroughly heroic in other places, OWK beamed himself down to his castle and promptly took control. Your goal, then, is to oust this wretched imposter and reclaim your pad.

Stormbringer is a splendid mish-mash of all the elements that have been employed in various arcade-adventures (horrible term) over the past year or so.

The large figure of White Knight glides along the screens (there are 64) running and jumping in fine Manic Miner fashion. Objects and other commands are handled through the abundance of menus. High-lighting options with the joystick and cursor, and selecting them by hitting Fire.

The first object that you'll come across (you're carrying it, in fact) is Gadget X. This is a utility item, allowing you to Save and Load games to/from tape.

Attribute problems, while still present can be tailored - a bit - by using another option. Magic Knight will either carry around a little block of colour, thus changing the colour of the background or he will pick up colours from the background. It's just a matter of choosing which you prefer.

Before you can get anywhere near ousting OWK from his position, you'll have to work out how to get back into your castle. Lots of things spring to mind. Of course, one solution is correct.

Disguises are easily the most exciting objects around. They will instantly transform you into another character. Very convincing. Very useful.

Objects, which number sixty-four are also very seldom what they appear to be. Many do things, become things or react with things in unexpected manner.

Stormbringer has fast graphics, a large array of rooms and many things to do. Some of the monsters are completely enormous, and though there isn't a disproportionate degree of originality, it's quite good fun. And as you'd expect it's all very slickly done.

A must for anyone in need of a quality budget title involving a small man with a large head who can disguise himself.

A must for anyone in need of a quality budget title involving a small man with a large head who can disguise himself.