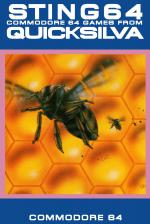 This program is aptly named. I don't like it and think it is poor value.

It is based on defending hives from attack. At the first level you control a swarm of bees to repel invading bees that are attacking three hives. When a hive gets overtaken you move to the next screen which requires you to defend an individual hive - and so on.

The game creates some interesting graphics displays, but to my mind falls down on giving the players much opportunity to show their skill. When I first played it I was troubled by an apparent lack of control via the joystick. However, this is intentional. If the joystick is not moved, the defending bees swarm around in a random manner. In practice, the effect is loss of control by the player. As an experiment, I let the game play by itself and it scored 374 against my 532.

As a final put-off I had loading trouble, which nowadays is very rare so, having reviewed it, I would not be inclined to play it again.