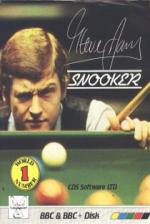 Snooker is one of those sports that has caught the public eye over the past few years, and with Steve "That's why I'm interestin'" Davis getting caught up with all sorts of money-making spin-offs since his rise to fame, the 'official' Steve Davis Snooker simulation really had to be.

Now, a very popular game for the Amstrad, the BBC version is, in fact, a very good simulation. You can pit your wits against Steve (in reality the computer), and, with a little practice, have a go at beating him.

Not that this take is all that easy mind, you have to align a rod between the white and the target ball, select the right shot (top spin, bottom spin, or left or right skew) knock the white into the pocket, or even pot more than one colour with one shot, which is definitely not snooker.

All the standard rules apply, with the exception of the colours, as colours like brown are impossible on the Beeb, and green balls on a green table are not easily seen, black is represented as a white circle and the brown by a green and a red dot, green is a white outline of green.

Steve Davis Snooker really lets itself down in that there are no sound effects whatsoever, which spoils the overall quality of the game, this is something that should be remedied as soon as possible, especially as the far inferior Acornsoft version of Snooker (which goes potty on the BBC+) is not a great deal better, no satisfying 'clack' as the balls collide, not even a beep when you have to nominate colours!

All in all, Steve Davis Snooker is a bit of a curate's egg, certainly the graphics are good and it offers a very good game, and even gives an accurate rendering of balls rebounding all over the place. I would even say it is as enjoyable as watching it on TV, but with no sound effects it is like having no commentary on TV with the sound turned off. Until these limitations are sorted out, I would approach Steve Davis Snooker with caution as this spoils the overall gameplay.

Still, it does work on the BBC B+, which is more than can be said for Acornsoft's older offering.

A bit of a curate's egg, certainly the graphics are good and it offers a very good game, and even gives an accurate rendering of balls rebounding all over the place.