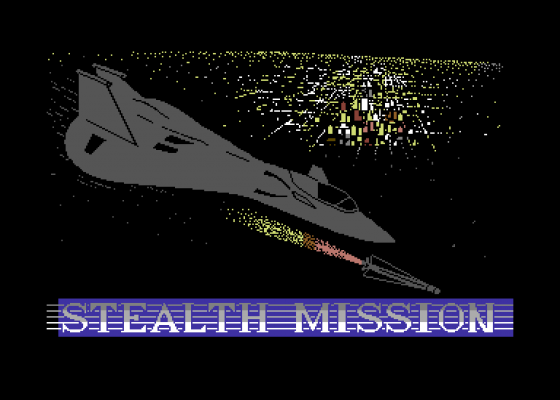 Hot on the vapour trail of Microprose's Project Stealth Mission, another combat flight simulation from the producers of Flight Simulators I and II.

In Stealth Mission, the would-be pilot takes control of a F-19 Stealth Fighter, the experimental X-29, or the tried-and-tested F-14 Tomcat and flies them in day or night missions over land or sea, dogfighting and strafing enemy installations with four types of bomb, six types of missile and a 20mm cannon.

Before each sortie, the game parameters are set via a menu system. Five dual-graded scenarios afford the player a selection of ten missions, which are further graded at one of ten skill levels. Pacifist pilots can also choose to avoid violent confrontations if they have one of the Sub Logic Commodore scenery disks which are accessed from the menu. One of the three aircraft is chosen and loaded with arms whilst a careful eye is kept on the overall weight. The player is then presented with a view from the cockpit, with instruments surrounding a filled-in 3D representation of the outside world, complete with mountains, rivers and runways. The pilot's view is adjustable so the player can cover forward, rearward, upward and side views, and there are also views available from a manoeuvrable spotter plane, a control tower and from the nose of a launched missile. A satellite view is also provided which is used in conjunction wth the packaged maps to establish the aircraft's position in relation to enemy targets. All views react to the aircraft's current status and a zoom in/out function boosts the range of visibility.

Around the periphery of the canopy display are the standard aircraft instruments - air speed indicator, altimeter and compass - while below is a pop-up navigation panel which displays the direction and range of VOR beacons, an instrument landing system and a tracking scope indicating radar sources. This can be removed to enlarge the canopy view, leaving displays of time, damage sustained, thrust level, fuel remaining and the G-force to which the aircraft and pilot are currently subjected.

Success in Stealth Mission is measured by a scoring system, and points are amassed by dropping bombs on primary and secondary enemy targets. The computer-operated weapons system is initialised by the automatic sighting-up of a target suitable for the selected weapon. When the target is in range, the pilot locks it into the target tracking computer and launches missiles or bombs as appropriate. 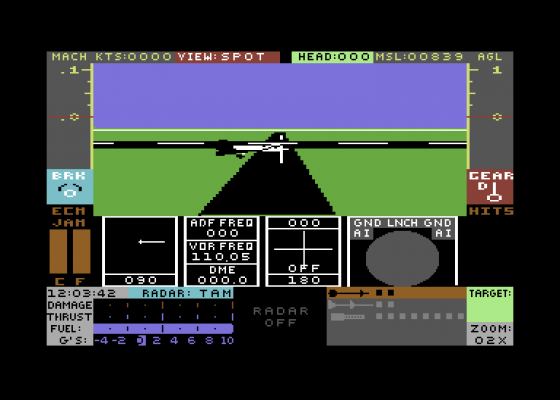 The three aircraft are also equipped with Electronic Counter-Measures units plus chaff and flare projectiles to deter incoming missiles. Failing that, there's always the ejector seat!

The one innovative feature which really stands out is the useful option between wire-frame and filled-in 3D modes; both are effective, but the solid fill graphics are slightly too jerky to be realistic. 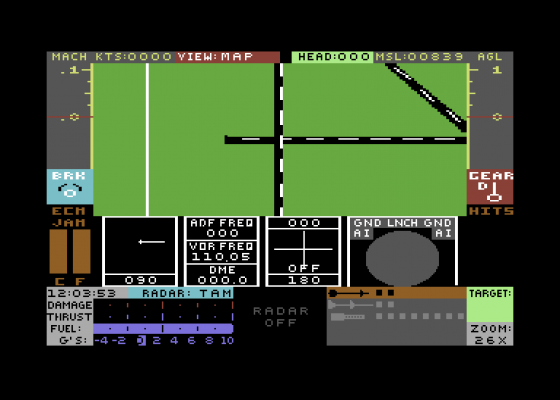 However, the whole program oozes quality: the number of viewing positions within and outside the plane is astounding, and is only matched by the variety and depth of the assignments involved. Even before you approach the missions, a good deal of enjoyment is had simply exploring the vast landscapes.

The only drawbacks are the relative slowness of the action and poverty of the combat sequences; otherwise the extra (if expensive) scenario disks and multitude of missions guarantee its lastability.

Oh no! Simulation lovers are now on the horns of a dilemma - namely, which is more worthy of purchase - Stealth Mission or Microprose's Project Stealth Fighter? Stealth Mission's filled-in graphics are terribly good, and some spectacular visuals can be set up with the alternative view options, but with all of the display elements working, the action can be slow, with sizeable gaps between animation frames. 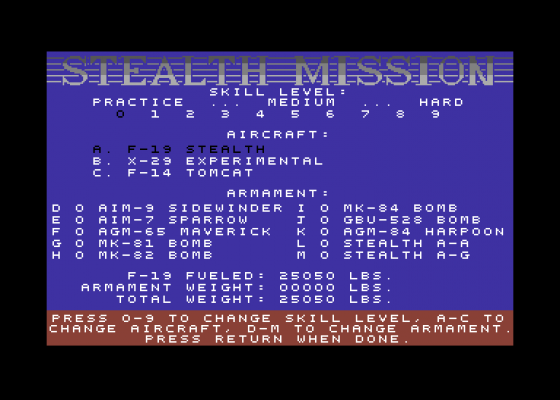 The action in Stealth Mission is also more drawn out, which isn't such a problem with the Microprose game because of its time acceleration feature. Being able to fly three totally different aircraft is a very compelling feature though, which, together with the numerous missions and skill levels provide the necessary essence of variety.

What Stealth Mission really lacks in the comparison with Project Stealth Fighter is the final touch of realism provided by placing the simuation in the real world.

It's far more stimulating to be avoiding SAMs over Tehran than it is over some nameless mountain range on an anonymous planet. Project Stealth Fighter's more topical documentation conspires with this aspect to produce a more engrossing combat simulation. 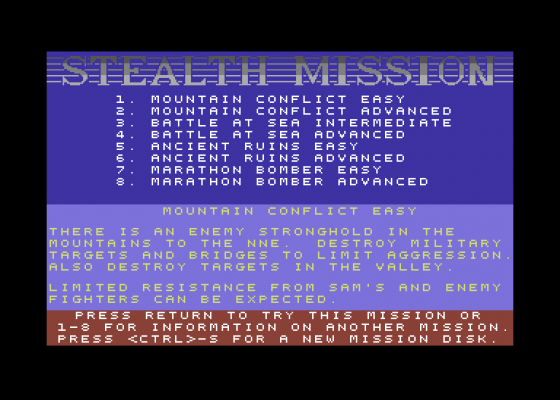 This leads me to credit Stealth Mission for being a superb simulation of flight and an incredible piece of progrmming, but as a game it has a narrower appeal that its competitor.

The amount of visual depth and variety in Stealth Mission is quite amazing. Many of the graphic scenes are outstanding, particularly the views from spotter planes and of the aerial refuelling sequence.

However, the trade-off between detailed filled-in graphics and frame update is not a generous one; the 128 handles it reasonably well, but it becomes a little too slow on the C64 to give a good impression of flight.

The buffer between command and action also makes control a little difficult. There are many options which speed things up however, although this decreases the graphical interest accordingly. I'm sure flight simulation fanatics should lap this up; the combat is a little weak but there's enough variety on offer here to make up for this deficiency.

Presentation 91%
Beautifully packaged with maps and a detailed booklet. Many gameplay options, but some keyboard controls are unwieldy.

Graphics 86%
Although sometimes slow in execution, the variety of visual options and the sense of realism they produce is remarkable.

Hookability 83%
The overpowering complexity of the simulation soon gives way to appreciation and enjoyment.

Overall 89%
Technically brilliant, but Stealth Mission's merits are going to be more appreciable to the flight-sim afficionado.

Technically brilliant, but its merits are going to be more appreciable to the flight-sim aficionado. 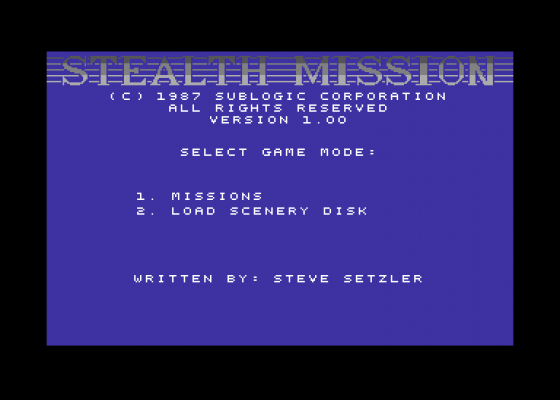