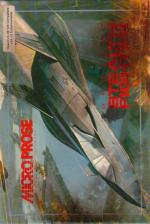 Well now - what do we have here? Mmmmmm, an 8-Bit version of one of Wild Billy Steely's super dooper simulations; this time of the F19-M035-1, known to the rest of the world as the Stealth Fighter.

Why's that? Well - because due to some fancy design and expenditure of loads and loadsa of the folding green stuff, the plane has a very weak radar signature. This means that it is very difficult tor any enemy to pick it up on their radars - and therefore it can pounce on targets deep into enemy territory with complete surprise. They've painted it black too - so it must be very difficult for the pilot to get into in the dark.

You might have seen the game appear on 16-Bit a while back and now it's on your own humble Spectrum. So whassit like?

For starters, this is not - repeat Red Leader - not going to be one for you "slam it in, load it up, shoot it out" brigade. Not with a 120 page manual, eh, and it's a tome that you're going to have to read through very carefully to even come close to wringing the full potential out of the game.

And don't loose the key card either - 'cos with over 30 potential control keys, you have to be a flippin' genius to remember this lot.

Come to think of it, you're going to have to have the patience of a Saint too, as the full load (which comes in three parts) takes a total of 15 minutes from the very start to "Chocks Away!".Better get a disc drive, eh - or take up reading epic novels in between missions.

OK, so that's the down side. The up side is that this is a title that takes the Spectrum very seriously. Locked up inside Project Stealth Fighter is a great number of missions and difficulty levels all to be flown over tree main combat areas - Libya, The Persian Gulf and Central Europe - each more difficult than the last.

The program is very sophisticated indeed - and be warned if you were expecting otherwise - is not geared towards pure arcade action. Far from it. it is obvious that most of the coding has gone into cramming all that strategy can control code into the Spectrum, with not that much going into the main visual display from out of the cockpit. This has been done in monochrome, with OK but not fab, vectors. Check out the three frames per second.

However, if you're willing to put up with that and want a game you can be assured you still be coming back to play this time next year - then you should think of making the hefty investment. But again, bear in mind, you won't be acquiring it for any major adrenaline surges, but the intense intellectual challenge and stimulation of piloting a billion dollars worth of kit.

Sophis flight sim, but likely to be a bit heavyweight for the average Spectrum owner.

Sophisticated flight sim, but likely to be a bit heavyweight for the average Spectrum owner.