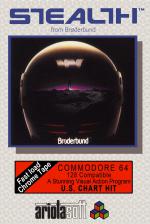 You are alone on a strange and barren planet, the only feature which catches your notice being the Dark Tower. This huge black monolith towering into the sky is where the evil Council of Nine resides and they're planning their invasion of Earth.

Armed with only your Stealth Starfighter, you have to penetrate the defences of The Tower and destroy it... for if you don't, the future of Freedom on Earth lies in peril. With that ominous information you set off and race over the planet to try to reach the Tower.

Stealth is a Buck Rogers type game with the similar sort of graphics, presentation and gameplay. You start a certain distance from the Tower and you have to skim across the surface of the planet towards it. There is a counter on screen which diminishes only when you are actually heading towards the tower, if you turn away from it then the counter will start increasing the distance (like in real life).

You also have a limited amount of energy that also diminishes whilst you're flying and when you're hit by enemy fire. Luckily it can be replenished by going over one of the yellow energy fields dotted over the landscape. These act as fuel tanks and add to your energy total. During a game it's vital to go over quite a few of these fields, otherwise you'll find yourself running out of energy before you yet anywhere near the Tower. Acting negatively to the yellow fields are the red energy fields - if you go over one, then it knocks energy off your total, a thing that you don't want to happen. The speed at which you pass over either type of field is important as well. The longer your ship is above one, the greater that field's particular effect on you.

On the way to the Tower you encounter several types of alien hazards; these being tanks, planes, heat-seeking missiles, volcanoes, bunkers and radar towers. The bunkers are the most deadly of them all and fire heaps of highly accurate bullets at you when you get near them. Radar towers fire heat-seekers on higher levels, and the tanks and planes make regular appearances and try to track and bomb you.

If you manage to get to the tower then you have the opportunity to shoot at it, and if you're on target then the whole thing will explode impressively and you can move onto a higher level with more aliens and fewer yellow energy fields.

Stealth has some very pretty 3D graphics, and when you first play it seems very impressive. The trouble is that is suffers from 'Scramble syndrome' - when you complete a mission you start exactly the same mission again, only at a higher difficulty level. This means that once you've been through it a couple of times, the game tends to become rather boring. There is it fait bit of challenge in actually reaching the Tower, but the game only has five difficulty levels and I can see that mastering it won't take too long.

As shoot-'em-ups go I don't think that Stealth is a particularly inspiring one. The 3D effect doesn't work that well, being unconvincing and unrealistic, but at least the sprites aren't so bad. The sound is as weak as the graphics, with a reasonable title tune and effects, but little else worthy of mention. The gameplay is unoriginal and unexciting, and I found the whole thing became very boring to play, very quickly.

Sound 54%
Average title tunes and a couple of blasting noises.

Lastability 46%
...but once done, boredom sets in.

Value For Money 53%
Just an extension on the Buck Roger theme.

Just an extension on the Buck Rogers theme... Better shoot-'em-ups are available than this.