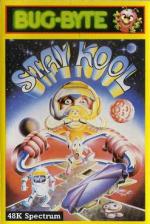 Space Pilot Luke Warm is stranded on his crippled spaceship after one of his less successful space battles.

It isn't his day either; although the emergency space shuttle is ready to go he has neglected to keep the fuel rods on the shuttle. They are scattered about the stricken ship and Luke must be guided around to collect them all. Unfortunately (the key word in any computer game) the damaged ship has sent the various automated devices wild. Can Luke avoid the nasties, collect all the rods and be ready in the shuttle bay before the damaged ship falls into the nearby star?

Stay Kool is another JSW clone, but this one does not aim to let Willy go, even providing a room called 'We must perform a ... WHAT?' as part of the clone effect.

The ship is formed of a series of interconnected rooms containing platforms, and varied nasties that bounce up and down or slide from side to side. Luke is a small white figure in a large fishbowl helmet with a healthy jumping ability.

Items to be collected flash. Below the playing area can be seen the title of the room, number of items collected, rising temperature and lives which convert into winged angels after deaths. Among the features of the game there are tractor beams which force Luke to rise along with them, teleport rooms and amongst all of this 50-screen game there is a Loch Ness Monster!

Control keys: Q/W left/right, B to SPACE to jump
Joystick: Sinclair 2 and Kempston
Keyboard play: responsive
Use of colour: good
Graphics: above average
Sound: poor and not much in the way of spot effects
Skill levels: 1
Lives: 5
Screens: 50

A responsive game with good use of colour and above average graphics.