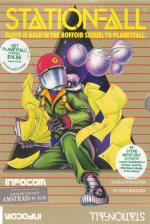 Steve Meretsky has justly acquired a reputation as one of Infocom's most inspired humourists, with Hitchhiker's Guide and Leather Goddesses as his more recent and renowned releases. He was also responsible for Planetfall and Sorcerer.

Planetfall was particularly notable for its introduction of the hopeless robot Floyd, who couldn't tie a shoelace even if you put him through a ten year intensive induction course. He does, however, have a certain bumbling charm that would appear to have endeared him to many Infocommers, and Stationfall puts him back into the action.

One of the problems with producing a game that is in some senses a sequel (to Planetfall) is coping with players who may not have played the earlier game. Meretsky does this by using the "FOOTNOTE" feature, so occasionally a reference to a character will be followed by the message "(FOOTNOTE 3)". Typing the command FOOTNOTE 3 will give you all the background detail you require.

To some extent (and with the notable exception of Hitchhikers), Meretsky's games are traditional adventures in the sense that they place a lot of emphasis on exploration, discovery, and puzzle-solving. The spice is added by Meretsky's inimitable humour.

Stationfall takes place in the far future, where as a (human) native of Gallium you join the Steliar Patrol and (after your success in Planetfall) find yourself promoted to Lieutenant First Class. Although the principle task of the Patrol is to scour the galaxy searching for survivors of the last great galactic conflict, which imposed a 10,000 year Dark Age on the space civilisation, you find your immediate task in the game is depressingly similar to the ones you've been doing for the last five years since your promotion pop over to Space Station Gamma Delta Gamma 777-G 59/59 Sector Alpha-Mu-79 to pick up a supply of Request for Stellar Patrol Issue Regulation Black Form Binders Request Form Forms.

This forms business is just one of the many fruits of Meretsky's gentle poking at bureaucratic dingbats that amuses throughout the game. The program comes with some excellently written blurbs, including a selection of forms. They all bear careful reading and will amuse almost as much as the game itself. My personal favourite was the Spaceship Activation Form, which is akin to our driving license and lists the space vehicles for which it is valid. Starting off in a serious vein with various spacetruck models and so on it soon degenerates into lunacy with the "Zero energy puddle-sitter, Sitting Duck brand" and. finally, the "Semi-Oofing Gigbung-powered Double-Fooz".

Anyway, you set off for the space station to collect the forms and find, as soon as you arrive, that the place is deserted apart from a hostile repair droid or two (easily avoided) and an intellectual robot by the name of Plato who is immediately befriended by Floyd. At this stage the exploration aspect of the game really comes into its own. The program comes with a detailed set of plans of the space station, which is on nine levels. The plans enable you to set about tackling the mystery in an organised manner that is both satisfying and, as you encounter various enigmas, exciting. After two hours of playing, I had still explored only two of the levels available, but already the items and clues I had encountered had me scouring the plans, checking out which section I would visit next. Shades of the detective story here, and no bad thing either..

Floyd provides much of the humour in the game, alongside Plato. He falls into the Thorin category of character, by which I mean that there isn't an enormous amount he can do, but he does keep you amused with his continual antics. My particular favourite is when he mentions how he "helped someone find a lost paper-clip". Together with the book-wormish Plato, the two robots play hide-and-seek together, and generally tumble about like a couple of metal kids throughout the game.

The mystery of the abandoned space station rapidly exerts a strong fascination for the player, and even when a message comes over the communications system from your home base telling you to return home because a supply of the required forms has been discovered, you're unlikely to hot-foot it back to your spacetruck. And, even if you do, you won't get very far. By this time, you're in the mood to try anything, and hitting the emergency beacon signal button you get the following the message:

The mystery of this abandoned space station rapidly exerts a strong fascination for the player...