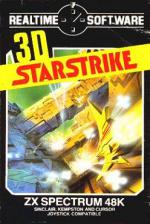 Realtime's Starstrike is simply the best translation of the Star Wars-style arcade game seen on the Spectrum - with some new twists.

It's a no-holds-barred space shoot out with excellent graphics and a playability rating that goes off C&VG's scale - well, it does if you're a fan of the arcade machine like me!

The scenario for the game goes like this. You are the pilot of a Starstrike spacefighter on a do-or-die mission to destroy the massive bases of an alien race known only as The Outsiders.

These bases inside hollowed-out moons are protected by squadrons of Outsider fighters - and the surface of the huge moons are covered in laser towers and other defence systems.

The only way to destroy the bases is to fly down the equatorial trench and fire a well-aimed shot into the reactor chamber.

Your Starstrike fighter is armed with lasers and protected by force shields - but there are depleted by enemy fire or collisions with the catwalks which span the trench. A read-out on screen tells you the condition of these shields - if it reaches red, then you're in big trouble.

If you manage to dodge through the catwalks and avoid enemy laser fire without being wiped out than you get a crack at the reactor. This is actually more difficult than the arcade machine version, believe me!

If you destroy the base, you progress to the next difficulty level - where different features, like the big laser towers, appear.

Starstrike's 3D vector-style line graphics are excellent and so is the presentation of the game. You get a brief pause in the action between screens as a battle-computer read-out flashes up telling you what's going to happen next. A pause that you need at the higher levels!

If you've ever wanted one of those Star Wars arcade games at home then you'll love Starstrike. It's a brilliant game destined to become a classic - and a C&VG Hall of Fame game!

A brilliant game destined to become a classic.