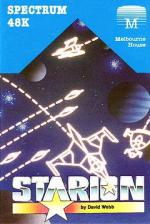 Starion just missed the last issue by the skin of its teeth but as it was so good we thought we'd include it in this issue, even if it is now a couple of months old.

In the year 2010 you are sent back in time to correct the disturbances caused by a race of time-travelling aliens. There are 243 time zones to visit and in each one you have to battle with an enemy fleet.

On destroying an alien ship, a letter of the alphabet is released and you have to collect it. When you have collected nine letters you have an anagram to solve in order to answer a historical question from another time zone. Once you've worked through all 243 zones you arrive at Event Zone and earn the title of 'Creator'.

Melbourne House have obviously decided to produce a program to compete with Elite on the BBC and in many ways they have done just that. The graphics are perspective vector type but the movement is truly superb, it takes a lot to make an impression on us battle hardened reviewers but we *were* impressed!

Flying and fighting is a skill in its own right, the techniques are nearly as complicated as in full flight simulation programs - often I spent time locating and chasing an enemy only to see him zoom past as I failed to slow down and match speeds in time. Two scanners are provided to assist you and sound is up to the Spectrum's usual standard. A classic!

The graphics are perspective vector type but the movement is truly superb, it takes a lot to make an impression on us battle hardened reviewers but we were impressed!