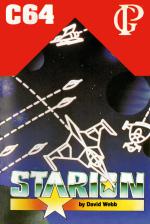 Starion is set in the far-distant future. The story takes place in the year 2010 and you play the role of Starion, a brilliant rookie fresh from the space academy. Because you're so good (?) you've been trusted with the one and only timeship - your mission: to rectify the devastation wrought in the space-time continuum by evil aliens. What these revolting specimens have done is to remove items of historical significance from important events, causing trouble throughout history.

To rectify this you have to go and retrieve the stolen items by patrolling the outer regions of space, intercepting and destroying the alien ships. As you destroy each enemy ship, it reassembles and forms a letter which must be collected and stowed aboard your ship. Later, when you have collected the required number of letters, you are asked to unscramble the resulting anagram to make a well known word that fits a given period in time.

When you have unscrambled the word you must locate the entrance to a time warp and fly into it, whereupon a time grid is displayed. Each grid has nine time zones and you must decide which of the time zones contains the historical event that your cargo fits. For example, were it V-I-C-T-O-R-Y you might think of Nelson and the Battle of Trafalgar - then again, you might not!

Having solved the problem, you are rewarded with fresh oxygen and fuel enabling you to fly off and solve the next time zone. However, should your cargo not fit the current problem, then you are forced to attack other enemy ships found within that zone to allow you to gain enough energy to escape and find the correct zone.

To give you some idea of the task ahead, here's the nature of the space-time continuum. In all there are 3 time blocks, within each block there are 9 time grids, each time grid has 9 time zones and space has 3 dimensions. If you're good at maths then you'll be able to work out that Starion has 243 time zones in all.

If this begins to sound like an educational program, don't panic. The screen display shows instantly that this is a 3D space arcade game. The cockpit view uses vector 3D to describe the enemy ships and letters. Below, the instrument panel indicates details on speed, hull temperature, enemy location, pitch, role, yaw, fuel and oxygen levels. The bi-planar scanners show the location of other objects, horizontally and vertically, be they ships, mines, missiles or fuel debris.

Above the scanners the year of the current time zone is shown, vital when trying to solve the time zone problems. The hull temperature is also vital because the outside temperature increases with speed and excessive laser fire. The hull can also be destroyed by direct hits from enemy weapons or collision with space rubbish. The general debris cannot be destroyed so you must steer around it.

Points are awarded in accordance with the speed with which the player completes each stage of the game, as well as for the destruction of enemy targets. The player is promoted depending on the number of zones, grids and blocks that have been solved.

It's amazing how disappointing conversions can prove. The Amstrad and Spectrum versions by David Webb are excellent, but for some reason Melbourne House have really slipped up with the Commodore version; I'm afraid to say that it's awful. A lot of readers seemed disillusioned with Firebird's Elite, annoyed at how slow and flickery the vector graphics are. Starion is a demonstration of how slow vector graphics are capable of running. The nice gameplay aspects from the old versions are still incorporated, but the main space battle scenes are just so slow, interest very quickly fades. The surrounding spaceship cockpit graphics are very nice, but that's the only good thing I can drag myself to say about this miss-release.

The Spectrum and Amstrad versions of this game are very impressive due to the speed of the graphics and their playability. Unfortunately the Commodore version is highly unplayable and has really awful graphics. The update on the vectors is very slow, making the whole program look rather jerky. Playing it is even worse - due to the speed and the time gap between updates, tracking even the slowest of alien craft is a real chore. Picking up the letters is diabolically difficult and when playing it took heaps of passes before the first letter was picked up. It's a shame that the graphics and playability are so lacking, especially since Starion is such a good game on other computers and in itself - but as the Commodore version stands, it's very dull to play indeed.

Conversions usually seem to go the other way, from the machines with the better sprite handling capabilities to those with the less flexible. The Spectrum is pretty good, however, at handling vector wire frame graphics at speed; witness Elite, generally considered better on the Speccy. Starion beat Elite out on that machine and, although perhaps not as dense a game, still rated highly because of its fast 3D graphics and entertaining content. But now on the 64 it's another story because it's so slow. That means the shoot-'em-up sequences have become dull, removing half the fun. If you enjoy anagram solving with a historical bent, then Starion has plenty to offer, but the game has become splintered and fails to satisfy totally.

Presentation 76%
The player can start in any timezone, but there are no other options.

Sound 78%
Nice backtrack, but does tend to get repetitive.

Hookability 53%
The game is very unplayable due to the update on the vectors.

Lastability 46%
Destroying spaceships soon gets tedious and spoils the fun of solving puzzles.

Overall 45%
A very disappointing conversion of an otherwise interesting idea.

This is well below Melbourne House's usual standards... It's a very disappointing conversion of an otherwise interesting idea.