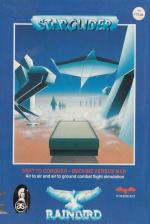 This is the latest game from Rainbird that features the 3D wire graphics that made Firebird's Elite so popular. It was also the game that Atari ST owners were so excited about until they actually started playing the game. The 128K Spectrum version improved (honestly) on the Atari original with a real purpose to the game with missions and things to do.

The Amstrad version is a completely different game again, with a slightly different missions system and much better graphics.

To those who haven't seen the other versions of the game, here is a quick resume: the peaceful planet of Novenia has been attacked by the warlike Egron's in huge bird-shaped spaceships built to mimic the natural space-going Starglider birds on their migration through the Novenian star system. These spaceships managed to slip through the orbital net of Sentinel space stations guarding the planet.

Soon the planet is under Egron rule and the only defending ship left intact is a museum piece on Novenia's moon. You fly this ship and have to save the planet single-handed. The game is very "Elite-ish", even down to some of the attacking ships that have a very familiar shape to Elite craft. The main difference is that Starglider is fought out on the ground. Tanks, transporters, rocket launchers (of various types) all sit around or drive around on the surface. Also on the surfaces are bunkers to re-arm and regenerate your shields, and power towers that you have to fly between to refuel.

For weaponry you have the usual lasers and a maximum of two camera-guided missiles. Armed with all this you then have to start playing the game.

The main arm is to destroy Starglider I; this is the command ship of the invasion fleet and needs a couple of missiles in its weak point (its rear end) for it to be destroyed. Other than that, you just go blasting around until you build up the required amount to earn yourself a mission.

These missions relieve the tedium of the game as they give you something to go for. Usually an extra item of equipment like a super missile or a rear view scanner. These are the only two items of equipment that I have found so far, though the section on the cockpit display for indicating which items of special equipment are present can show more than two - perhaps items such as the energy unit present in the 128K Spectrum are provided.

Picking up energy is one of the harder things to do, as a power tower transmitted is made out of three towers formed into a pair at one end and single pylon at the other. Between the single pylon and the pair, power is transmitted along subterranean cabling and can be picked up by skimming along the ground between the pair of pylons and towards the single pylon. Your energy then gets re-charged. However, this can be rather difficult when there are walkers and stompers (they do exactly what they sound as if they do) marching all over the place, shooting at you and stamping on you.

The graphics are very good and quite quick. Colour has been added to a certain extent and this is especially effective when the self-propelled gun is tracking towards you in glorious close-up. The graphics are also fairly fast and have none of the flicker that you might expect. The design of the obects is also very good, the Starglider drones (though not Starglider I) look most impressive flapping around.

The game comes with the now obligatory 64-page Rainbird novella. On this occasion it is a reasonable work that you really must read in order to work out what you are trying to do in the game. The instruction book is much smaller at a mere 15 pages, but it packs in all the necessary information that you might want, though it is a bit over-verbose at times and it can be difficult to pick out the wheat from the chaff.

A good-looking game with a high perceived value, though it does get boring after a while as there is so little depth to the play.

A good-looking game with a high perceived value, though it does get boring after a while as there is so little depth to the play.