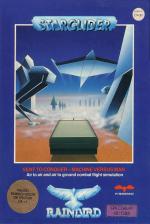 Deluxe arcade action is the promise of Rainbird's new game. How does it fulfil this aim?

The unthinkable has happened. Novenia has fallen to the Egron battlefleet, cutting off the power supply to Candrillo Base on one of Novenia's moons.

For many years the Egrons' constant attacks on Novenia had come to nought against the protective umbrella of the orbiting sentinels. Now, through a cunning trick, these defences had been breached and the Novenians found themselves crumbling under attack. The sentinels were thought to be invulnerable but, without their protection, Novenia was being reduced to dust before the horrified gaze of the Candrillo team.

The Egron trick took advantage of the Achilles' heel of the planet. As an important staging post for the flocks of Stargliders, the sentinels' battle computers had been programmed to ignore their graceful flight as they homed in on their Novenian landfall during a migration which took them through deep space. The Egron trick was simple, create a craft which imitated the flight of these birds and the sentinels might, just might, ignore them.

Despite the considerable difference in size between the Egron Stargliders and the Starglider birds, the computers only recognised the flapping wings and the loose V-formation of another flock arriving for a well-earned rest. Now that the Starglider fleet had disgorged its venomous assortment of war machines, the majority were on their return journey leaving the main Starglider to supervise the final stages of the assault.

Candrillo Base was in a stunned state of confusion. Without the vital power supplies from Novenia, their days were numbered. Nowhere on the moon was there an armed craft with which to challenge the Egron attack. Then an old AGAV was discovered in a disused hangar. Although Airborne Ground Attack Vehicles had once been the bee's knees, the sting had long since been drawn from their tails in favour of the sentinel project.

In the hands of Candrillo personnel, Katya and Jaysan, the AGAC was modified and made ready for a desperate attempt to recapture Novenia. The craft was small and limited in both firepower and fuel but the Candrillans were in a corner and willing to die fighting rather than sit and wait for the arrival of the grim reaper.

The latest game from Rainbird starts with the arrival of the AGAV on the Novenian surface. As the display screen clears after the hot descent through the atmosphere you enter a world which was previously the preserve of Atari ST owners.

Vector graphics first gained prominence via the phenomenal success of sister company Firebird's Elite space trading game. Starglider ST attempted to bandwaggon its way into history, but nothing could disguise the fact that it was no more than a sophisticated mayhem game lacking the strategy elements which made Elite worthy of the awards heaped upon it.

That the game can be encapsulated within the limited memory of the smaller Spectrum shows what a fine piece of programming this is and what a rush job was done on the ST version. As far as I'm concerned, this is the best piece of vector graphic programming which has been seen on a home computer but, once again, I'm left wondering what lasting qualities the game has.

The aim is to search and destroy Starglider One, the pride of the Egron fleet. To do this, you command the AGAV and its very limited firepower of lasers and guided missiles. Laser power is fairly lavish but the AGAV can only carry two missiles at a time. This limits the effectiveness of your craft considerably. Many of the enemy weapons require a missile blast for their destruction and Starglider requires at least three well placed hits. Somewhere there must be a supply of extra rockets.

The sentinels were not infallible and several servicing stations were built on the planet to re-equip faulty craft. The AGAV has been adapted to dock with any of the four repair depots. This not only restores the AGAV to pristine condition but also loads up an extra missile. It takes time for a depot to produce a missile so obtaining a full payload takes time.

When the view screen clears, a depot is one of the first things to appear. At this point you only have one missile so it is desirable to attempt an early docking. The sentinels are awkward to manoeuvre in Novenia's atmosphere so the depot's surface entry port rotates to eliminate the need to manhandle the sentinels into a docking position.

The sentinels are automatically drawn into the depot by tractor beams but these cannot cope with the small AGAV. Manual docking must be timed correctly for a successful outcome and practice early in the game prevents wasting precious time when the damage register is low later in the game. This is very reminiscent of space station docking in Elite.

Once inside the depot, you can interrogate the databanks whih show the range of enemy craft which must be faced in the violent world outside. Tanks, missile launchers, silos, walkers, stompers, aerial mines, Bute and Skim fighters, drones and the Starglider itself can be viewed at leisure from a distance and close up to aid identification later.

The only thing that the depots can't provide is energy. Recharging must be achieved by finding power towers elsewhere on the planet. These are always found in grounds of three towers. Two form a narrow gate opposite the third yellow topped tower which sends power back towards the gate through underground cables. Energy is collected by flying low through the gate and heading towards the generator tower over the cable pathway. Inductive effects will then recharge the AGAV's power cells.

All this is done under the hail of laser fire from Egron vehicles in the neighbourhood. Soon your attention must be turned to their elimination.

Many of the enemy craft can be eliminated by several blasts of the sentinel lasers fitted to the AGAV but the larger ones will have to be destroyed with a missile. Drones, walkers, stompers and the Starglider all require this treatment and each missile must be manually guided to its mark.

When the launch is made, the normal view from the AGAV is replaced by a missile's-eye view of the target. Guidance is a delicate business and the highly manoeuvrable missile needs only the gentlest of correction to its flight if the target is to be destroyed. If the missile goes astray it may be possible to swing around back onto target before it auto-destructs harmlessly.

Unfortunately, the programmer missed an opportunity to add an extra danger element at this point. When the missile turns through 180 degrees it should logically be possible to see and hit your own vehicle in error but, sadly, the AGAV is not a visible object.

My favourite vehicles are the walkers and the stompers. Both are bipedal machines and where the walker looks like a mechanical Tyranosaurus Rex, the stomper walks like a T-Rex with wellies on. Often, when you're attempting to dock with a depot, one of these beasts will be walking all over you causing damage galore.

Once again I must praise the graphics because the animation of the vehicles is superb. So what if the Bute and Skim fighters resemble Elite cast-offs in shape? The fact that several vehicles can appear on the screen at once in full animation and with missiles shooting towards, and past, your view without any apparent effect on speed is impressive programming of a very high order.

The eventual aim is to bring down Starglider One and to do this, you will have to reload and refuel several times. The craft is a narrow target for the missile to hit and it takes time to perfect the technique.

As you progress from level to level, the other vehicles distract you by attacking the vital power towers but, using the sectorial mapping readout and your new-found skills, the challenge lessens as your abilities increase.

The 128K version prevents boredom setting in by setting tasks after you've accumulated a score of 4,000 points. To find your mission, you must dock with a depot. Each time you dock, the dulcet tones of Rainbird's Clare Edgeley announces the fact in crystal clear voice synthesis. The missions are either to collect useful items such as power pods and rear view screens (standard issue on the 48K version) or to fend off an attack on a vital location.

The value of the game must be a product of its price and its lasting qualities. When you first play the game, the quality of the graphics and the sound of the 128K version cannot fail to impress, but slick programming alone does not make a game.

After developing your skills for a while, the gameplay deteriorates to the level of an ordinary shoot-'em-up. Despite the extras of the 128K missions, the game lacks the depth of the older Elite where, through skillful trading, you could convert your ship into a formidable fighting machine with a vast tract of space at your mercy.

The packaging is a lavish box containing a useful keyguide showing the controls which may be used, a playguide, a 64-page novella which gives hints and tips on playing the game as well as putting the whole scenario into context and a colourful A3 poster showing the AGAV in all of its antique glory.

Overall, it is a superb package which will appeal to those who appreciate clever programming and search and destroy action. The gameplay would benefit from greater depth but its level is probably inhibited by the magnificent graphics and is, therefore, quite satisfactory as it stands.

I feel that the price may inhibit the number of sales which it might otherwise have attracted but it should sell well enough to keep Rainbird happy.

The gameplay would benefit from greater depth but its level is probably inhibited by the magnificent graphics and is, therefore, quite satisfactory as it stands.