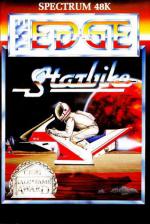 An Orola, in case you didn't know, is a bouncing yellow blob which knows what it's doing and where it's going.

It's also pretty fed up, as some mean race called the Mordra has just blown its planet to smithereens.

Luckily, though, they just happened to have these escape pods at hand and some Orola managed to get away.

An escape pod seats five and, for reasons known only to the Orola, they sent one escape pod to each of a galaxy of planets.

Your task is to tour those planets, returning the Orola to their teleporters which they have set up.

Each time you do this, you are moved on to the next sector to look for another Orola. Problem is that if, after getting the last one, you are at the wrong side of the planet, you have to fight your way back again across the galaxy before you can take off.

That's the general idea of the game which took me some time to puzzle out. The instructions are written in the form of a memo from the Commander to you and there's a lot to remember.

Once the game has loaded, you can select the controls. You can use a Kempston, Fuller or Protek interface or the keyboard.

The first thing I noticed was the similarity to Jet Pac. Sound effects are similar and so is the man on his starbike, even the aliens move in the same way. The difference is that the screen scrolls sideways as opposed to being set on a single screen.

It's colourful and fast, but if you've already bought Jet Pac, you may be disappointed.

It's colourful and fast, but if you've already bought Jet Pac, you may be disappointed.